In an editorial, the Save Weehawken group is calling in residents to be proactive in preserving the Hudson River waterfront by asking for a vote on a project on the Hoboken and Weehawken border to be postponed. Sponsored content.

As residents of New Jersey’s “Gold Coast,” we are fortunate to live in a special place. Part of what makes Hoboken, Weehawken, and the surrounding communities special is the Hudson River waterfront.

That is why it is critical that we do everything we can to preserve our waterfront for future generations.

That is why it is disturbing that the Weehawken Planning Board is pushing through a massive residential project on the border of Hoboken, in Lincoln Harbor, that would forever eliminate precious open space.

The project’s developer, Hartz Mountain Industries, wants to build a pair of massive high-density towers right on the Hudson River.

The project will create significant density, traffic, and congestion in Weehawken, Hoboken, and Union City.

Now that we are facing a global pandemic, where we cannot participate in public hearings in person, it is an affront to the democratic process and effectively limits public participation in our own future to continue to move towards the approval of this project without giving residents the ability to appear in-person to voice their concerns.

The coronavirus pandemic has also demonstrated that we need to more carefully consider how we plan our communities to promote public health, including preserving open space.

The developer is effectively shoe-horning this project into a relatively small space that cannot reasonably accommodate such a development.

Despite efforts by groups like, Fund for a Better Waterfront, and residents from Weehawken, Hoboken and Union City to ensure a brighter, more sustainable future for our waterfront, the Weehawken Planning Board seems eager to approve this project at tonight’s meeting.

To deny residents the ability to fully voice their concerns shows a profound lack of regard for the will and good of the public.

The Weehawken Planning Board should postpone all action on major development projects.

Residents can call the Weehawken Mayor’s Office at 201-319-6005 to ask him to postpone
approval of the Hartz Mountain Massive Towers project until the public can appear in person.

Residents should also register for tonight’s meeting in the event that the Planning Board chooses to move forward.

Save Weehawken is a group trying to preserve Weehawken Cove from large-scale development. 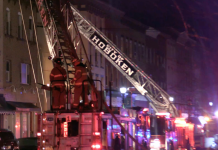