In an editorial, Hoboken resident Joshua Sotomayor-Einstein presents seven steps the U.S. can take to defeat Russian President Vladimir Putin without entering the war with Ukraine. 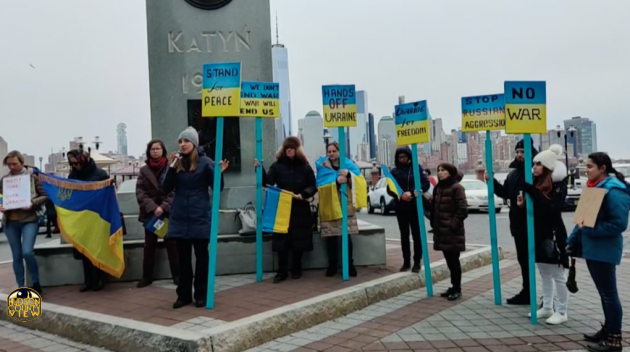 The chaos unleashed by Russian dictator Putin in his war of choice against Ukraine is a threat to US national interests.

The resumption of invasion as the international norm, the proliferation of nuclear weapons as more nations seek a nuclear shield, and the massive disruption of trade caused by renewed large scale regional conflicts will lead to a global economic crash.

US interests (to say nothing of values) are on the side of a free and independent Ukraine, but an open war with a nuclear armed tin pot dictator is obviously off the table.

Below are 7 tools the US, Europe, and the world can use to support Ukrainian freedom and defeat Putin without creating a larger open military conflict.

1.Embargo, Embargo, Embargo – Cut of all economic links between Russia and the US as well as use trade incentives to coax other nations to do the same. The current sanctions, put in place by the US and other nations are not enough to take the steam out of the meager economy fueling Putin’s power.

The US must use the carrot and stick to bring the world into compliance. For example the US can threaten to upgrade relations with Taiwan or close certain US markets to get the Peoples Republic of China on board.

The West can offer Turkey economic incentives to close the Bosporus Straights, its sovereign territory that controls access to the Black Sea, to all Russian ships. All assets of Russian oligarchs tied to Putin and the Kremlin, but located outside of Russia, should be seized and sold with the proceeds given to the Ukrainian resistance.

2. Give Ukraine Weapons – The US and Europe should send a continuous supply of arms to Ukraine including modern anti-tank and surface-to-air weapons.

Moreover, in America and other nations MIG fighters owned by counter-force companies contracted by militaries to train their air forces should be purchased and their fighters be donated to Ukraine.

US allies should be encouraged to donate their old MIG fighters to Ukraine and be made eligible for modern US F35s at significantly discounted rates as replacements for any fighters donated.

3. Establish a Free Zone in Western Ukraine – Now that Ukraine is officially a European Union applicant, the US should encourage European nations to establish a safe zone in western Ukraine to prevent Russian annexation and/or the control of all of Ukraine by a puppet Putinista regime.

Doing so does not require European forces, entering as peacekeepers, to engage in open war with Russia because western Ukraine is (so far) free of Russian forces.

Moreover, moving European forces into western Ukraine as peacekeepers preserving a safe zone presents a hard border for Putin even he would be reluctant to cross, as attacking neutral forces of EU and NATO nations would further paint him as the aggressor.

Preserving the western region of Ukraine as a haven of the democratically elected Ukrainian government (if it must go into exile from Kyiv) will allow Ukrainian freedom fighters to continue the struggle should the capital fall.

4. Arm Refugees – Among the hundreds of thousands of Ukrainian refugees there are undoubtedly men and women who fled in order to bring their families to safety.

The call must go out by the EU and host nations that if any Ukrainian refugee seeks training and arms to return to Ukraine and fight, they will be provided with both.

5. Encourage Finland (and Sweden) to Join NATO – The Putinista propogandists pretend that NATO’s last enlargement on Russia’s borders in 2014 (17 years ago) is the reason for Putin’s unprovoked invasion of a democracy.

Welcoming Finland into NATO, as well as Sweden, will help reassure our allies and signal to Russian dissidents (and Putin) that the West does not fear him. Moreover, it will show other global malefactors that there are consequences for naked unprovoked aggression.

6. Redeploy US troops from Germany and Bottle Up the Baltic– The 40,000 US troops in Germany (for which the US pays $1 billion a year to house), should be moved into the Baltic States, Finland, Poland, and Norway.

US troops should engage in the widespread military training of the Eastern and Northern European populations for a total defense policy to dissuade a future invasion of those nations by Russia.

7. Deploy “Little Green Men” – The Little Green Man Strategy Putin employed in his invasions of Georgia, Ukraine, and Syria should be used against him.

In those wars of choice Putin deployed a mix of Russian special and regular forces with national flag patches removed, Wagner Group mercenaries (which may not all actually be mercenaries), and denied Russian state involvement while providing military hardware and logistical support.

Western nations should follow the lead of the French Foreign Legion with its Ukrainian members and allow servicemen who seek to fight as individual volunteers for freedom to head to Ukraine with full kit and arms.

Poland and Lithuania should be used as a base to support rebellion in Putin’s most western exclave, Kaliningrad, which is on the Baltic and has no land route to Russia proper.

Romania and Moldova should be encouraged to send their own “little green men” to liberate the illegal breakaway failed state “Transnistria” supported by Putin and within the sovereign territory of Moldova.

With the leak of information from Belarus, it is public knowledge that Putin has plans to invade Moldova. Additionally, Putin’s agents in Georgia are agitating for a pretext of his full take over in the Caucasus Mountain country.

Though there were decades of peace in Eastern Europe, NATO and the EU have been (until now) a hapless but defensive military/political and economic alliance only going where invited, and though Russia promised to respect Ukraine’s independence after the fall of the USSR in return for its nuclear disarmament, Putin has engaged in a war of choice.

By doing so Putin has made Belarussian dictator Alexander Lukashenko a puppet (as Russian troops occupy the nation) and aims to take at least two more European nations (Ukraine and Moldova).

However boastful Putin is, Russia’s position is weak; its economy is completely dependent on oil and natural gas and cannot survive cut off from international trade.

Just as importantly, and just as the much more powerful USSR could not, Putin’s Russia cannot survive a military arms race (even a mild one with its neighbors). The US has fought Russian forces (the Wagner Group) in Syria and decimated them.

The Ukrainian people have fought for almost two weeks, keeping at bay Putin’s much ballyhooed Russian military from diving deep into Ukraine and have repeatedly prevented the encircling and fall of Kiyiv, but they cannot defeat Putin alone.

Without putting American boots on the ground, America can serve once more as the arsenal of freedom and democracy.

To prevent the invasion of democracies becoming the new international norm, to stave off the global economic depression an era of massive regional wars will cause – for our own interests and values, we must support Ukraine and push Putin back.