Former Assemblyman/Bayonne mayoral hopeful Jason O’Donnell is going after the Mayor Jimmy Davis administration for their “completely disingenuous” project labor agreement that will be introduced by the council next week.Â 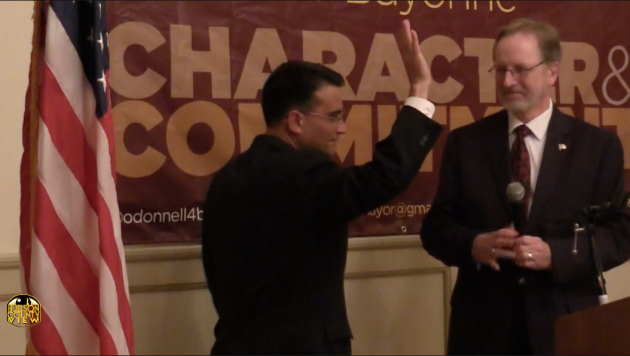 â€œThis completely disingenuous stunt by the Davis administration is an insult to the intelligence of every working man and woman in the City of Bayonne and to every member of organized labor throughout the state,” O’Donnell said in a statement.

“For three and a half years and running, the Davis administration has, through its actions, denied the men and women of organized labor an opportunity to compete for work in the City of Bayonne.”

O’Donnell continued to slam the incumbents, stating that they have approved over thirty payment in lieu of taxes (PILOT) agreements since taking office, to the benefit of only “rich, out of town developers.”

The 30-plus previous PILOT agreements agreed to by the Davis administration have all excluded PLA language and the newly proposed ordinance puts the PLA threshold for inclusion on any PILOT project over $15 million dollars.

“As mayor, my administration would require PLAs for any and all necessary PILOT backed projects. Letâ€™s be clear, PILOTs used as development tools should not just be for the benefit of wealthy developers while leaving Bayonne residents without community benefit agreements or good paying jobs. I would make sure that Bayonne residents benefit from Bayonne projects and that the projects are done responsibly and with quality union labor.â€

In a statement, Davis opted not to trade punches with O’Donnell, indicating that his administration has been working since day one to provide redevelopment plan that provides “real property tax relief for homeowners.”

“The City Council and I have been committed since Day One to creating a Redevelopment Plan that will deliver real property tax relief for homeowners, restore property values, and create new business opportunities and housing for our families and good paying jobs for Bayonne residents,” Davis said.

“The PLA with the Building Trades Unions is just another step forward in the progress we are making. Looking at all of the growth and development taking place all over Bayonne, it’s clear that our City is on the rise and our future is bright.”

The Bayonne City Council will vote on the first reading on the ordinance at Wednesday’s meeting, which takes place at City Hall, 630 Avenue C, at 7 p.m.