Gov. Phil Murphy (D) announced that he would sign an executive order allowing renters to use their security deposits to make rent payments, following proposals from two Hudson County elected officials to use security deposits for immediate rent relief. 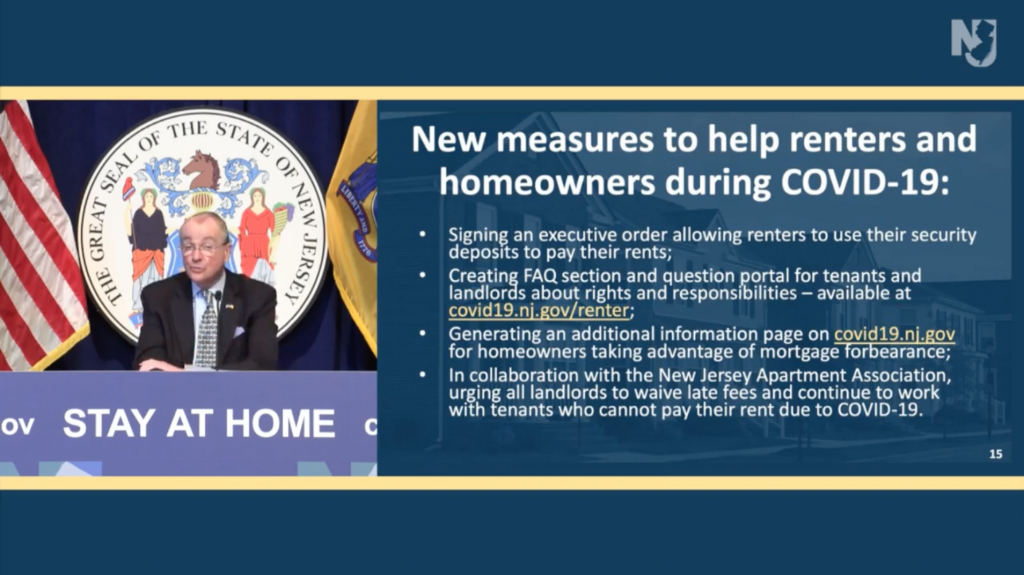 “We recognize the anxiety that so many feel about looming rent payments … especially with May 1st a week away,” Murphy said during his daily Trenton press briefing. “We will continue to be proactive on housing relief.”

When signing a lease for an apartment, renters are obligated to provide landlords with a security deposit to be held held in an escrow account that can not exceed more than a month and a half worth in rent.

That money, legally owned by the tenant, is then untouchable until the end of the lease agreement.

Murphy’s order now allows renters to “direct their landlords to use their security deposits to pay their rents, whether that be to make up for a shortfall or to pay it in full.”

“During this emergency, renters should have the ability to tap this deposit to help them secure their place in their home,” he added.

The order will go into effect immediately and will remain in place for 60 days following the end of the public health emergency,Â according to governor’s office.

The move by Murphy comes as the COVID-19 virus has left an unprecedented number of workers left unemployed, after the state closed most non-essential businesses, leaving renters struggling to pay their most important expense.

More than 40,000 Hudson County residents have successfully filed for unemployment insurance since the COVID-19 crisis began: approximately 6.5% of the county’s total population, according to recent data provided by the New Jersey Department of Labor.

Meanwhile, more than 850,000 New Jersey workers have filed for unemployment since the COVID-19 crisis began, according to The Record.

The move by Murphy follows a joint statement issued by Bayonne Assemblyman Nick Chiaravalloti (D-31), and Jersey City Ward E Councilman James Solomon, who last night announced they would be advancing proposals – on the state and local levels, respectively – to enable any tenant to pay their rent with their security deposit.

Solomon and Chiaravalloti said there is an estimated $1.1 billion in security deposits statewide.

100%. May 1st is coming up. Policymakers have to act now. Our estimate is this idea could unlock over $1.1B in rent for tenants.

More to come…both on how to turn this idea into reality AND more initiatives to help renters.

Thank you Assemblyman for moving it forward. https://t.co/FtiuQAUexs

“Renters need assistance, [and] most landlords who own a two- or three-family home rely on that rent, and having possibly over a billion dollars sitting in escrow accounts doesn’t really make a lot of sense,” Chiaravalloti said.

While Murphy’s order is only effective during the duration of the state of emergency, Solomon and Chiaravalloti said they’d like to take the measure further and change the way landlords and tenants manage security deposits.

“My next step is to reform security deposit legislation locally. Large, lump-sum security deposits are a barrier to stable housing for low-income families in Jersey City. Now is the time to change it.”

Chiaravalloti, meanwhile, said he would like to move his proposal forward soon, but would first”need to figure out how to recapture those security deposits.”

Cincinnati was the first municipality in the country to make the move to adopt such a policy, requiring landlords to offer accessible alternatives to the traditional lump sum security deposits.

Experts say that a nationwide release of security deposit escrows could result in a multi-billion dollar stimulus package of its own.

“With most Americans living paycheck to paycheck, how is it that you could have them paying extraordinarily high prices for rent, and then have them lock up thousands of dollars in security deposits, when most Americans don’t even have $400 saved for an emergency,” he told HCV.

“The money is … supposed to be the tenants’ money, but you have it completely locked away. You don’t earn any interest on it; the landlords can’t use it either by the way, and it just goes from one apartment to the next if you’re lucky enough where your landlord doesn’t take it from you: And the current situation with COVID-19 has just exasperated that problem.”