In a letter to the editor, West New York resident NicolÃ¡s Behncke says that the most recent board of education meeting where $1.5 million in shared services were approved was “another public display of corruption.” 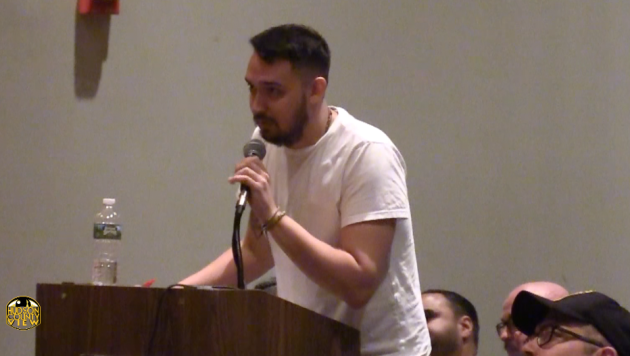 The last Board of Education meeting was just another public display of corruption by the Roque administration. Shared agreements must exist and our school’s security should always be on top of the priorities list.

However, the Board’s main priority should unequivocally be to make sure that the school experience for the children in our community is one that encourages them to learn by thinking critically, one that teaches them to become the leaders of the future by
growing up to be compassionate human beings and in order to accomplish that and much more we need to give teachers the necessary tools to cultivate the fertile mind of a child.

On Monday July 3rd, the Board of Education held a special meeting to pass a set of share agreements with the Town of West New York.

In these agreements, the Board agreed to pay the Town a sum of more than $1,500,000 while in return the town would pay the BOE up to $93,000, as claimed by Superintendent Herrera on the meeting, to use its facilities year round.

Unfortunately, there is no concrete evidence of that claim by the superintendent since no numbers have been made available to the public as of yet.

But what we do know by documents made public recently, is that during the 2014-2015 school year the town paid the BOE a total sum of $4 for the use of the Board’s facilities year round, while the BOE still paid around $1,500,00 to the Town.

Citing budgetary concerns Trustees Portillo, Cheng, and Scheurle voted against the agreements and that’s when the fear mongering campaign by the Town and the Board started.

The claim that these trustees had exclusively voted against having police presence in the schools and that they were willing to put our kids in danger is sheer and simple fear
mongering.

It is easy for the Roque administration and his minions from the Children First slate to point fingers and say that certain trustees are not willing to put up the $515,568 (or $28.00 the hour) needed for police presence in the schools.

Additionally, it is also part of their untruth campaign to say that the trustees voted against the $607,584 for the townâ€™s recreation program because they donâ€™t care about
the kids in our community.

There is nothing wrong with paying the Town $515,568 to have police officers in the school, as a matter of fact the Board should pay as much as necessary to protect our kids.

Meanwhile, here in West New York for years the Town and the Board have claimed that there isnâ€™t enough money to bus the kids from the original Harry L. Bain building (while it is under renovation) to the temporary school that the kids are attending in the old Saint Joseph High School

Instead of the Town giving away free ambulances abroad, and paying â€œconsulting feesâ€ to other corrupt politicians, shouldnâ€™t the Mayor and his administration use that money to help the Board pay for police presence?

That way the BOE can save some money and hire more teachers, buy school supplies, finally have a budget for across the board field trips, or even buy a second giant flat screen TV for the Boardâ€™s administrative offices?

So they watch Caso Cerrado in different rooms at the same time in full HD!

Furthermore, it really stuck out to me when Commissioner Cirilo said at the July 3rd meeting that the Board should pass the agreements because the town uses the Boardâ€™s facilities year round for recreation activities.

So let me get this straight: the Board of Education pays the Town of West New
York $607,584.00 so the Town can run its recreation programs year round in the schools?

Shouldnâ€™t that be other way around? Shouldnâ€™t the Town pay the BOE over a half million dollars to use the schools? Thatâ€™s like my landlord paying me rent to live in their property.

As per the â€œrecreationâ€ agreement, it states that â€œthe Board requires property and facilities for its educational and athletic activitiesâ€. But doesnâ€™t the Board already own such
facilities?

It goes on to say the Town is supposed to use the money for the â€œmaintenance, preparation, utilities, and other costs of the recreational areasâ€ that the town owns such as â€œDonnelly Park; Miller Stadium; Miller Park; Washington Park, Centennial Fields; the field commonly known as Little League Field; Wiegand Park; and Tennis Courts at McEldowny Park, (â€œFacilitiesâ€) currently part of the Recreation Department of the Town which
have been utilized by the Town for recreational purposes â€¦â€ and these â€œmaintenanceâ€ and â€œpreparationâ€ also include â€œrefuse removal by the Town.â€

To clarify; the Board is using its schoolâ€™s money to pay the Town to allow itself to use the facilities that the Town owns for recreational purposes and to remove garbage from the Townâ€™s parks?

Arenâ€™t they supposed to do that in the first place? This is why I strongly believe that
questioning these agreements is in the best interest of The West New York
Board of Education.

Again, such agreements must exist and they should be mutually beneficial, but it is very problematic when a corrupt mayor fills the Board of Education with people that will follow orders expecting rewards in the near future.

It is amusing to me that everyone is saying that the vote by these trustees against the shared agreements was politically motivated, as if just handing over more than $1,500,000 to the Town to pick up garbage in the parks and to use the schoolâ€™s facilities wasnâ€™t a politically motivated vote.

And honestly, those political motives are very dangerous because they are voting for the agreements fully aware of the fact that because of their vote, they are going to have to let teachers go instead of hiring more teachers at a time when because of gentrification, condominiums are coming up all over West New York and our schools are getting more and more overcrowded by the day.

By transferring the Boardâ€™s money to the Town, they know that hundred of kids will go another year without field trips, without new and updated books, itâ€™ll be another year where us the parents are going to have to provide basic supplies for our childrenâ€™s classrooms.

Sadly, some trustees that cast their votes with an alternative agenda are now seeing the fruits of their labor by either landing a job in the Town or in the County, as we have already started to see with Trustee CastaÃ±eda, Trustee Rodas and Trustee Gonzales.

In conclusion, Iâ€™d like to dedicate my last paragraph to Brazilian educator
and philosopher Paulo Freire who once said â€œlanguage is never neutral.â€

On the July 3rd meeting Superintendent Herrera and President Parkinson used their voices amplified by their positions of power to say â€œThese agreements have existed for over 20 years.â€

Well, thatâ€™s another lie. How can the recreation agreement exist for over 20 years if up to 2006 the Town had an actual Recreation Center? There was no need for a shared
agreement between the Town and the BOE for the Town to use the schoolâ€™s facilities for recreation.

Also, Iâ€™m old enough to know that even 15 or 16 years ago most schools did not have a police presence, Memorial was the first one to get cops and then slowly it started expanding to the other schools.

So please, to all our democratically elected leaders, stop the fear mongering. Please stop spending the schoolâ€™s budget to further your political ambitions and start providing our teachers with all the tools that they need (including hiring more teachers) because as Paulo Freire once said:

â€œThe teacher is of course an artist, but being an artist does not mean that he or she can make the profile, or can shape the students. What the educator does in teaching is to make it possible for the students to become themselves.â€ Peace.

Bank of America signs on as $1M corporate sponsor for LSC’s...