Jersey City elected officials, residents and the families of 9/11 survivors members gathered at the foot of the 9/11 Memorial on Grant Street to remember the tragic terrorist attacks from 2001.Â

Jersey City Council President Rolando Lavarro said that since that tragic day, he has become more serious upon reflection.

“People often say that nothing has been the same since September 11. Those words are often invoked longingly, yearning for what once was,” began Lavarro.

“I tell you the truth for me, and maybe it is for you too. I know that I have been much more serious since 9/11, and a part of me yearns for the ease and care-free life I had as a 30-year old young man…..but the reality is that since September 11 it will not have been the same for any of us. On this day…I ask myself are we safer, stronger as a country today [and] have we come together or are we more divided,” Lavarro asked.

He answered, “Then I ask myself what can I do, what can each of us do to be safer, stronger and more unified as a country?”

Ward C Councilman Richard Boggiano recounted where he was on that fateful day, and he expressed frustration that Jersey City’s efforts treating, clothing and feeding the survivors and injured has gone unrecognized.

“Over the years, one thing that I have resented was that New York City never, never really gave us credit here in Jersey City for what we did. We had this whole area lined with stoves, feeding a lot of the people from New York. This city did so much. The people of Jersey City are the greatest people in this country,” said Boggiano.

John Guarini, Chairman of the 9/11 Committee of Jersey City, also talked about the loss the country suffered on 9/11, as well as the recent loss of the late U.S. Sen. John McCain.

Guarini started off his comments about McCain by saying that McCain should be remembered by everyone in the country. But then he criticized President Donald Trump for, according to Guarini, not showing more respect for the late senator by mocking his bout with terminal cancer at a rally in Wilkes-Barre, Pennsylvania in August.

That’s when someone in the front row abruptly stood up and approached Guarini, telling him not to cast aspersions upon the President.

Guarini returned the glare towards the heckler to say, “I’m talking about the great John McCain, and don’t point your finger at me. I’m not one of those kind of guys. Believe me.” 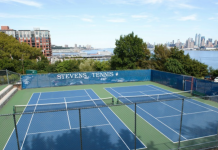