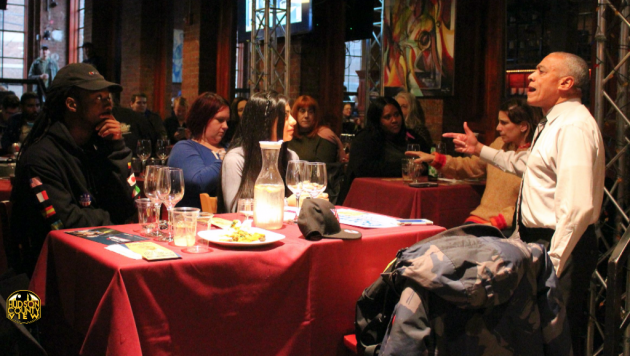 Bernie for JC Campaign Vice Chair Barry Brendel said that while he sees Sanders as the only candidate that can “somehow pull through” Super Tuesday on March 28, there will likely be a push for a second ballot – including the vote of 750 superdelegates.

Nevertheless, he’s confident in the pool of volunteers working state by state on phone banks, in a campaign which he described as a “national organism.”

“We’re a big pot of delegates, and it will be the last primary prior to the convention in July,” Brendel began.

“New Jersey will be the last thing people remember, and I sincerely doubt it will be over and irrelevant by June. We’re one giant, national organism. Everyone in New Jersey and in this country is an Iowa volunteer right now. If you’re not calling Iowa, you’re calling New Hampshire which is next up. We’ve made five million calls over the past three weeks. I can’t imagine any other campaign has made even 500,000 in that time.”

Additionally, Brendel told supporters there that volunteering to register younger crowds as voters would be crucial to the campaign, as Sander’s favorability weighs very heavily toward those ages 29 and under.

Roger Quesada, a North Bergen native who unsuccessfully ran for a state assembly seat last year, told those in attendance that running on a progressive platform is efficacious, win or lose.

He also noted that it’s likely that the Sanders campaign will seek out Hudson County Freeholder candidates to run on their ticket for more optimal ballot placement.

“I was inspired by this movement personally,” Quesada said. “My family came from Cuba in the 1960s and they’re traumatized with ideas of leftism.”What we need to focus on because we do have a generational divide here and drive down that this is about democracy, and the average people getting something out of what they’re putting into the pie.”

“Northern Hudson County is a very difficult place politically to run, but I did it, and I’m not floating in the river, so I feel good about it. Anybody can do it. I didn’t necessarily run to win, but on an environmental platform, which isn’t nubmer one on the agenda of the Latino community. While it wasn’t singlehanded, we helped defeat a power plant in North Bergen which would have raised emissions drastically along with several environmental organizations.”

What to do about Sanders’ positioning on local ballots was another topic of discussion.

Researchers almost unilaterally agree that having a favorable position at the top of the ballot tips the scales to a certain extent in any given election.

“In Jersey, it’s a very complex ballot. Trust me when I say that Bernie could get buried in the bottom right of the ballot unless he gets a U.S. Senate candidate, which we’ve got, along with nine freeholder candidates,” Brendel told HCV.

“So, sign up to be a freeholder, otherwise the clerks have the ability to say ‘we’ve got our presidential candidates up here, and you can be down here on June 2.'”

Larry Hamm, a longtime community activist in Newark and U.S. Senate candidate running on Sanders’ ticket, spoke at length about why he chose to run alongside Sanders.

“Don’t let these folks ‘psycho’ you. Some of you are walking around with long faces, and people at the debate parties look all demoralized. This is psychological propaganda. What do you think the media that’s owned by the billionaires are gonna do, let Bernie Sanders come out a winner on TV? Hell no,” Hamm exclaimed.

“Bernie Sanders is us. He is an activist. He has been in the movement for more than 60 years. I saw a photograph the other day of Bernie Sanders as a student getting arrested for protesting segregated housing in Chicago … We have someone who has been for peace, justice, and equality for more than half a century. This is not a conventional campaign, this is a people’s movement for justice operating in the electoral arena.”

Union leader and Vice Chair to Sanders’ NJ Campaign, Patricia Campos-Medina, said that whether the Hudson County Democratic Organization chooses to have a closed primary or not, Sanders supporters need to count on a movement independent of the local “machine.”