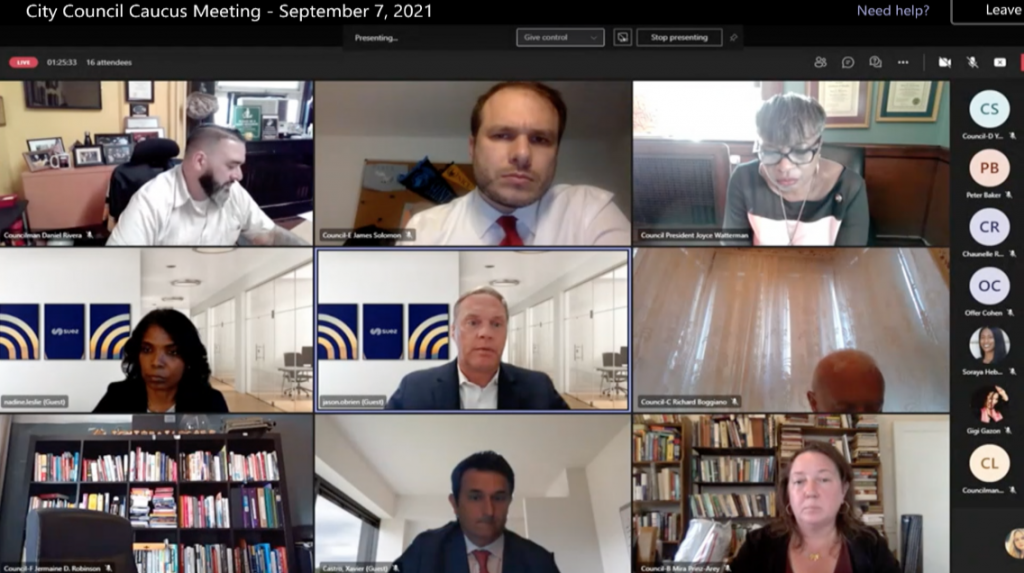 Jersey City Municipal Utilities Authority Executive Director Jose Cunha began by explaining that flood waters moved the soil covering a 72-inch steel aqueduct in Cedar Grove, which supplies water to Jersey City and Hoboken, a tree fell over, and pulled up a “boulder” that rolled over and cracked the aqueduct.

This allowed surface water, mud, and dirt to enter the finished water “for an unspecified amount of time,” Cunha said, thanking the council for hearing from him and Suez on short notice.

The boil water advisory was issued for Hoboken and Jersey City on Thursday evening and lifted on Sunday evening, to the dismay of roughly 350,000 customers.

Suez came under fire again in Jersey City, after an infamous E. coli test last summer, for they botched water deliveries on Friday, with most coming three to four hours late.

“Being responsible for operating and managing a water system, distributing water to residents and businesses – and protecting public health – in Jersey City is a job that we take very seriously,” she said.

“Even more so when there is a major storm like Hurricane Ida heading our way. Emergency teams begun preparations for the storm days before and remained mobilized and did not rest until the boil water advisory was removed.”

She continued that a 24-inch hole in the transition main was fixed within five hours, also pointing out that Paterson, Clifton and Passaic were issued a boil water advisory that still remains in effect.

“On a typical main break, a boil water advisory could be lifted within 24 hours. But due to the magnitude of the storm, Ida impact, the NJ DEP required we took an extra da as a precaution,” she added.

She also acknowledged that the water deliveries didn’t go as planned, claiming that it wasn’t due to a lack of effort.

“I want to let you know that our emergency teams, that were working to restore service to our communities, gave their best efforts in trying to meet the city’s bottled water request, but certainly experienced great difficulty in making it happen. Hurricane Ida was an act of God with significant impact across the State of New Jersey.”

She suggested that going forward, a comprehensive Suez plan would be presented to the city that includes procuring more water buffaloes to Jersey City and storing them there, conducting emergency drills with the city and state agencies, and doing an assessment of the city’s entire water infrastructure.

During the question and answer session with the council, Leslie had few specific answers beyond what was in her prepared remarks.

For example, Councilman-at-Large Daniel Rivera asked her if Suez had enough reserved water supply to cover most of the city.

She responded that supplies were short since this was a statewide crisis, but that about 100,000 bottles of water were distributed in Jersey City, though did not mention how many bottles or gallons of water they had on reserve.

Ward D Councilman Yousef Saleh pressed Leslie on this issue, asking what the actual contingency plan is in case of an emergency, where she repeated that having more water buffaloes on hand and storing them in the city were essential.

Saleh continued that he felt the response was “flat footed,” with Ward F Councilman Jermaine Robinson later noting that he bought water bottles out of pocket and that his constituents didn’t see a Suez water delivery until 1:30 or 2 p.m.

“If it’s not distributed, then why was it offered?,” she asked.

“Well we tried to accommodate the request, as I said, we put our best efforts: our supplier told us we could have 200,000 bottles distributed by 9 o’clock as an estimated time – we conveyed that to the city, and unfortunately, we encountered some issued with the distribution.”

Ward B Councilwoman Mira Prinz-Arey also expressed frustration about the lack of Suez employees at Lincoln Park, with Robinson later the one to again pose the question of how many water buffaloes Suez has available for times like these, to which Leslie admitted she didn’t know.

She also couldn’t say exactly how many accounts they have in New Jersey, but said most of their business is in Hudson and Bergen Counties.

Unlike his colleagues, Ward C Councilman Rich Boggiano said “you learn from experience” and that the circumstances were largely unpredictable.

“Nobody expected what happened. We can’t come along and criticize everybody. It happened, so learn from what happened and in the future let’s hope that doesn’t happen again.”

Ward E Councilman James Solomon, who had called for a thorough investigation into how Suez handled this matter, asked if non-Suez customers like apartment tenants and restaurant owners could sign up for their alerts.

He also wanted to know if Suez could issue wireless alerts, similar to Amber alerts that reach everyone’s cell phone when a child goes missing in a given area.

Jason O’Brien, the Suez Vice President and general manager who oversees their Northeast region for environmental services division, said anyone could sign up and was unsure if wireless alerts were possible.

He was also unsure how many people receive their email and phone alerts, but noted their social media and traditional media advisories are sent out in real time.

Just before 5 p.m., Leslie said the New Jersey Department of Environmental Protection saw that the first water sample came back clean on Saturday but decided to test one more out of an abundance of caution.

“When they ask us to do an extra day, of course we will comply.”

Prior to moving onto agenda items, Lavarro said he wanted to “amplify and echo” all of Solomon’s points, as well as state he wasn’t sure how things would change moving forward.

“It’s unclear to me, as we’re finishing this conversation, who is going to be responsible for getting this implemented,” he asserted.

Finally, Ward A Councilwoman Denise Ridley said that Suez should consider having a community liaison set aside for crises like PSE&G does, a suggestion that Leslie seemed open to.

Mayor Steven Fulop had floated the possibility of cancelling Suez’s contract on Friday, though it remains to be seen if the city will consider putting it out to bid or consider bringing water services in house.

2014 Jersey City Board of Education candidate profiles on Hudson County...