Jersey City Board of Education Vice President John Reichart, who was elected to the board just over a year ago, sent an email today announcing his resignation from the board, effective Friday. 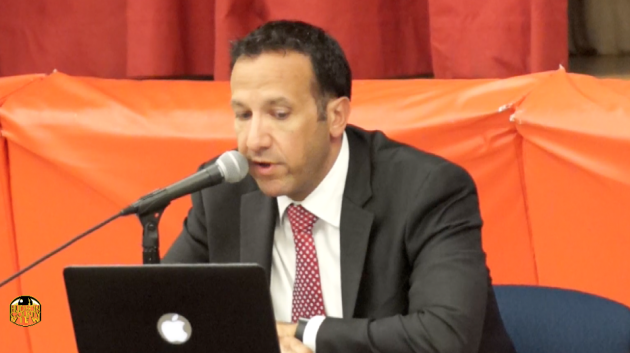 Board President Vidya Gangadin confirmed this evening that Reichart announced his resignation via email at 5:27 p.m. “Of course he will be sorely missed,” she said over the phone, noting he did not provide a reason for stepping down.

Last year, Gangadin ran on the Education Matters slate with Reichart and Marilyn Roman, sweeping the election with the help of the Jersey City Education Association and Mayor Steven Fulop.

Education activist Gina Verdibello was their only challenger and coincidentally ran under this year’s incarnation of the Education Matters ticket, though was beaten out by Jersey City United’s Luis Felipe Fernandez in the November 8 election.

The new board members will be sworn in at the January 10 meeting.

Gangadin declined to speculate on who may be filling Reichart’s spot on the board or who the new vice president would be.

In a statement, BOE Trustee-Elect Sudhan Thomas implied that the board she not appoint someone that just ran in last week.

“We should not allow this unfortunate situation to allow any one a back door entry into the board in contravention of the electoral decision of the citizens of Jersey City,” he said.

“This replacement process has to be handled very carefully in accordance with the process and we are already in touch with counsel to ensure no breach of policy or procedure.”

Thomas also suggested former board members Sue Mack, who endorsed his campaign, and Imitiaz Khan as potential replacements for Reichart.

Back in September, despite not being a candidate, Reichart came under fire from the Jersey City United team for posting a “social divisive image” on Facebook where San Francisco 49ers quarterback Colin Kaepernick and Linden bombing suspect Ahmad Khan Rahami were depicted in the same scene with the caption “Turds!”

Reichart, a retired NJ Transit cop who now works for developers Eric and Paul Silverman, owned up to the post, admitting he deleted it because someone he cared about found it offensive.

Jersey City teachers union walks out on meeting after remarks by...