Two weeks after the Jersey City Council voted to table an ordinance to install 72 new utility poles for a 5G cellular network, they voted 6-3 last night to remove the ordinance from the tabled agenda items before approving it by the same margin. 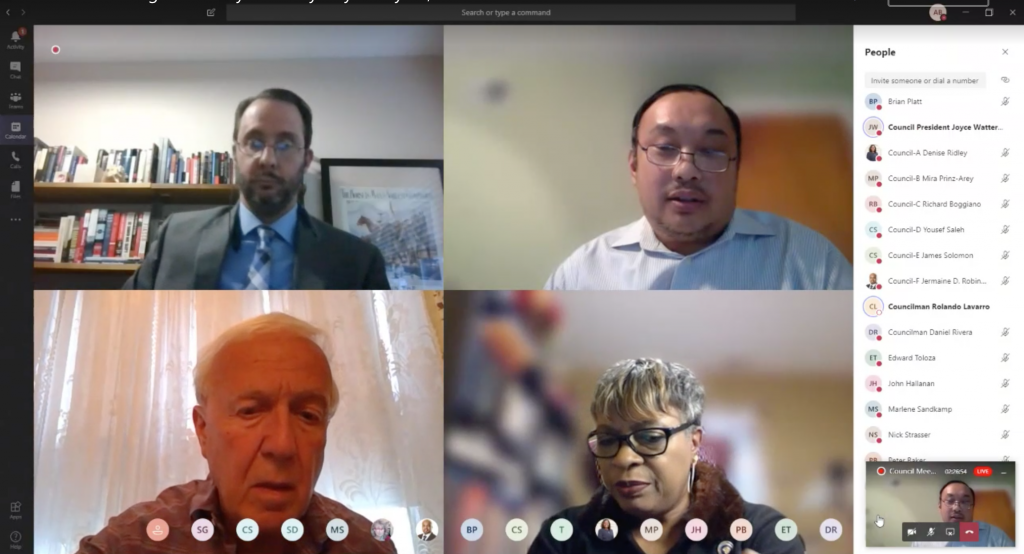 The vote was accompanied by a spirited debate sparked between council members who wanted to approve the measure since they didn’t want to be sued by the vendor and those who felt the 5G cellular technology is too nascent to be considered safe.

ZenFi Networks initiated a lawsuit against the city one day after tabling the ordinance, officials said at last night’s meeting.

On the latter argument, Ward C Councilman Richard Boggiano continued to say that there is plentiful evidence on the internet that suggests that 5G technology may emit high levels of radiation.

He said at the Council’s virtual caucus meeting on May 4 that he saw a Facebook post that indeed warned of radiation.

However, he was quickly rebuked by ZenFi Networks Chief Administrative Officer and General Counsel Robert Sokota, who reiterated that the amount of radiation is no greater than the levels that are emitted from standard WiFi routers.

Councilman-at-Large Rolando Lavarro expressed concerns about whether the city can collect more than $750 in users fees from the installation of the 72 utility poles, as well as the co-location of equipment from different vendors on existing utility poles.

Jersey City First Assistant Corporation Counsel Nick Strasser explained that, in regards to charging a higher fee for new utility poles, every cellular provider in the marketplace needs to be treated the same per Federal Communications Commission rules.

“This council has approved two prior 5G contracts for other vendors and the fee charged was $750 per pole,” Strasser noted.

He also emphasized that the ability to raise revenue from the any installation of poles is strictly within the purview of the state legislature.

“Going back to the payroll tax last year, the only way Jersey City was able to have a Jersey City tax was that it was granted that authority by the state legislature,” began Strasser.

“You’re always allowed to charge fees for services related to applications, reviews and the like: and that’s exactly the case here. However, that review, that fee, needs to be directly related to the efforts of municipal employees for that task, in this particular case, it’s $750 per pole.”

On the topic of co-location, Strasser noted that ZenFi Networks said it would be willing to accommodate other 5G cellular vendors on one of their 72 new utility poles, thereby avoiding cluttering the rights of way for residents.

Before the vote, Strasser again re-emphasized what he told the council at their May 6 virtual meeting that only the FCC can determine whether 5G is safe, which they already have.

“It is outside the purview of the municipalities, counties and states to determine on a case-by-case basis whether they believe that the technology is safe,” Strasser said.

He noted that he understood the council’s frustration that only the FCC can determine the safety of 5G cellular technology, which is why there was a late add-on to the agenda last night.

The council introduced a resolution encouraging U.S. Reps. Albio Sires (D-8) and Donald Payne, Jr. (D-10), as well as U.S. Sens. Bob Menendez and Cory Booker (both D-NJ), to introduce changes to the Federal Telecommunications Act to give more authority to municipal governments regarding the placement of 5G cell towers.

Nevertheless, Strasser was quick to note not to expect any action soon on an act that passed in 1996.

“It’s unlikely that in the next six months to a year there will be any action taken on this.”

Additionally, Ward A Councilwoman Denise Ridley, one of the first council members to express concern about whether 5G is safe, decided to vote against introducing the ordinance back in April.

However, with the initiation of a lawsuit by ZenFi Networks, she decided to vote yes because she doesn’t want the city to be incurring substantial legal bills defending its position.

“I don’t know if we should spend this money right now to fight this in court if we know we are going to lose – or if the attorneys are saying this is a battle that we’re going to lose – but I think we should still continue to do the research and reach out to our federal representatives,” said Ridley.

“As I said, there are many scientists that disagree totally with what the FCC says and I’ll tell you something: anybody who gets sick, I hope they not only sue the city, they sue the judge or any court that ever says that we have to go along with this. I think it’s a disgrace, and I say no.”

Ward D Councilman Yousef Saleh added that the city has already approved the installation of 5G with two other vendors and therefore wouldn’t be in a good position to win the lawsuit.

“I really think that this council also approved twice 5G in our city, so it’s already here. The court isn’t stupid, they’re going to look at this and say ‘you guys approved it before and now you’re having this open dialogue in the city council.'”

With the council voting to pass the ordinance by a margin of 6-3, with Ward E Councilman James Solomon, Lavarro, and Boggiano voting no, the lawsuit brought by ZenFi Networks is now moot, according to Strasser.

“These folks don’t want to inform the public: the council has a responsibility making sure that people are aware … they just gotta do better,” former Ward B Councilman Chris Gadsden, who had previously spoken out against the measure, said over the phone.

“Everybody who voted yes, who took corporation counsel’s word for it, they have a responsibility to the community for the location of towers. They didn’t do enough.”