The Hoboken City Council okayed new salary ranges for electeds and municipal directors, along with a handful of employees, at last night’s meeting, as well as the first reading of amending their pay-to-play rules. 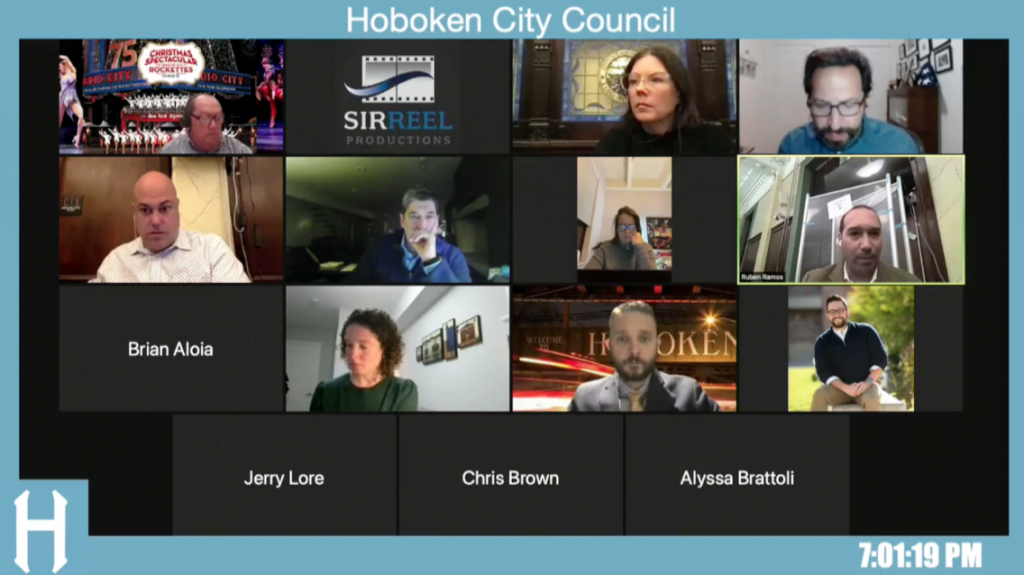 While Ramos had called for last night’s meeting to resume in person last month, evidently there was not a consensus across the board. Only 3rd Ward Councilman Mike Russo and 6th Ward Councilwoman Jen Giattino joined him at City Hall.

The measure was approved 5-2(1) on first reading.

“I’m disappointed to see that this seems like it’s gonna go through. I am upset about this really because this wasn’t brought up during the election. Not a word, not a peep. I can see why because it would’ve been a political hot potato,” said Sheila Brennan, who unsuccessfully ran for a council-at-large seat on the “Independently Together” ticket last month.

“Shame on the sponsors of this and shame on any of you that vote for it,” later calling it “ridiculous” to exclude unions from the city’s strict pay-to-play laws.

The ordinance before the council would allow unions to contribute the state maximum of $7,200 to candidates, instead of the $500 currently on the books in the Mile Square City.

Rachel Feldman, a 5th Ward resident, spoke out against increasing the salary ranges as well, scoffing at the notion that this as about retaining qualified city staffers.

“If director retention is your goal, why I ask, mingle city council raises with that?  … An over 45 percent increase in city council salaries is unwarranted.”

She also said that the answer to flouting campaign finance rules should be enforcing them, not loosening them.

Prior to the the vote on salary ranges, 2nd Ward Councilwoman Tiffanie Fisher suggested calling for a vote on the three categories separately: electeds, directors, and municipal employees.

To accomplish this, the measure would have to be separated into three ordinances that are introduced on first reading.

“Quite frankly, I think this may be the opportunity to have the right discussion as well as the right types of support for each one of the categories that are dissimilar,” she said, making a motion to reintroduce to that was seconded by Giattino.

The motion failed 7-2, with only Fisher and Giattino voting yes.

The subsequent vote on the ordinance was then approved 5-3(1), with 1st Ward Councilman Mike DeFusco, Fisher, Giattino voting no and Ramos abstaining.

With the approval, the assistant comptroller, comptroller, chief financial officer (CFO), payroll supervisor, and tax collector will see their salary ranges increase from $8,000 to $10,000.

As for the first reading to amend the pay-to-play ordinance, that vote was 5-2(2), with Fisher and Giattino voting no, while Ramos and DeFusco abstained.

The governing body also voted in favor of bringing back the office of constituent affairs, a campaign promise by Mayor Ravi Bhalla’s slate, as well as to implement a new division of housing that will be run by outgoing Councilwoman-at-Large Vanessa Falco who opted not to seek re-election last month.