Ray Greaves, a former Bayonne councilman under ex-Mayor Mark Smith, has been hired as an aide for Smith’s successor Jimmy Davis. “Ray’s responsibilities will include constituent services, attending functions and events with the mayor, managing his schedule, dealing with business owners investors and handling special projects such as infrastructure, liaison with the board of education,” Bayonne Business Administrator Joe DeMarco told Hudson County View.

Davis’ former chief of staff, Andrew Casais (also his nephew), resigned in February and his position was never filled.

Casais earned $70,000, while Greaves was hired at $55,000, added DeMarco, emphasizing that Greaves is not Davis’ new chief of staff.

Greaves was elected to the council in a special election in June 2010, but lost a re-election bid in 2014 to now 3rd Ward Councilman Gary La Pelusa.

He has remained politically active in South Hudson though, garnering support for Jersey City Mayor Steven Fulop’s re-election bid, playing a role in the Amalgamated Transit Union eventually endorsing him in March.

Also a former board of education trustee, Greaves has also been seen as a close ally of Davis and Assemblyman Nick Chiaravalloti (D-31) in recent months, emceeing fundraisers for both Peninsula City elected officials.

Editor’s Note: This story has been updated with comment from Ray Greaves. 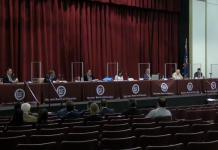