A former Bayonne City Hall employee is alleging that Jimmy Davis, both before and after he was mayor, sent her multiple sexually charged text messages. The messages began in early 2013, long before Davis announced he would be running for mayor, and ended in late 2014, about six months after he’d been in office, according to the alleged victim – who sat down with Hudson County View last week.

The lifelong Bayonne resident and former Davis campaign volunteer allowed this reporter to look at her text history with the mayor, consisting of hundreds of message, ranging from casual conversation to discussions about the inner workings of City Hall – both under the Smith and Davis administrations.

However, there were also several instances where Davis sent sexually suggestive messages, ranging from “I would eat you alive!!!!” on July 3, 2013 and a clear reference to oral sex on December 6, 2014.

In the vast majority of these instances, the alleged victim would not respond in any way and she told us that she did not delete any text messages on her end.

Furthermore, a quick examination of her phone revealed that she had Davis’ cell phone, home phone and home address saved in her phone contact.

â€œWhen it happened, I was like â€˜what the hell is he saying that for?â€™ â€¦ Why do you talk like that when you know Iâ€™m not going to do anything? What gives you the right to talk to me like that?,” the former City Hall worker said, who is in the midst of a fight to get her job back.

“It makes you feel dirty. I donâ€™t know why he changed, heâ€™s never said these things in the past … My life is ruined [after being fired] and it’s sad he did this to me,” she added, noting that she and Davis grew up together and have been acquainted for 38 years.

The woman added that she forgot she even had the messages and only came across them after looking for information pertaining to an unrelated case, which also alleges sexual harassment at City Hall.

She further stated that she did not want to put her name on the record yet since she didn’t want “my family to get harassed by his cronies,” but said she plans on doing so in the near future.

A spokesman for Davis shot down the allegations, given that they’re being made anonymously.

“These are anonymous, unsubstantiated allegations that should not be taken seriously, especially when the person making them refuses to be publicly identified,â€ said Davis spokesman Amit Jani.

â€œIt is disappointing to see these claims be covered in the media given that they are being made anonymously and without evidence. Mayor Davis is a tireless advocate for the residents of Bayonne and his reputation should not be tarnished in this manner.” 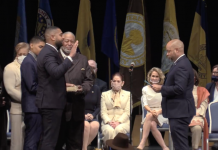