As part of the federal vote-by-mail trial for Frank Raia, longtime Hoboken politico Matt Calicchio testified that he worked for 5th Ward council candidate Eduardo Gonzalez in 2015, revealing one of the two unnamed candidates mentioned in his criminal complaint. 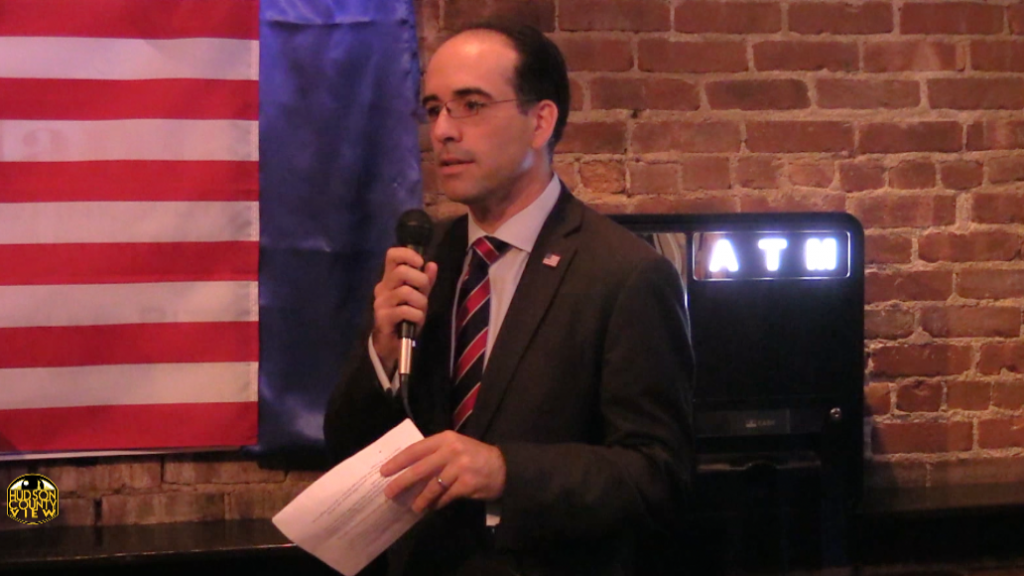 After a brief sidebar, Calicchio responded that he had recorded “Mr. Belfiore, Mr. Gonzalez and Mr. Romano” as part of his deal with the government.

Perry Belfiore is a longtime operative in the 4th Ward who routinely opposed former Mayor Dawn Zimmer and the candidates she supported, while Gonzalez unsuccessfully ran for the 5th Ward council seat in 2015.

Zimmer was backing incumbent Peter Cunningham in the 5th Ward, who prevailed in that race.

While Romano was not on the ballot in 2015, he supported the group of candidates backed by 3rd Ward Councilman Mike Russo, which included Gonzalez.

The subject matter of the tapes, or when they were made, was not discussed, but Assistant U.S. Attorney Rahul Agarwal confirmed that tapes were admitted as evidence in this case.

“We turned over a number of recordings made with a number of individuals and we donâ€™t believe that Mr. Raia is on any of those tapes,” Agarwal told Martini.

As was reiterated yesterday during Calicchio’s initial testimony, he pleaded guilty last month to participating in vote-by-mail fraud schemes in connection to the 2013 and 2015 municipal elections in Hoboken.

His criminal complaint says that two candidates benefitted from Raia’s alleged VBM scheme in 2015: candidate 1 was said to have Calicchio and William Rojas working for them, while candidate 2 is only described as the chair of their own election committee.

After cross examination and it appeared that Calicchio’s meaningful testimony may be over, Agarwal decided to finally shed some light on the 2015 aspect of the case.

“Which candidate were you working for?,” Agarwal followed up.

While under the initial direct examination from Agarwal, Calicchio also affirmed that Bluewater Operations, a Clifton-based consulting firm run by Ryan Yacco, had been helping Raia and the One Hoboken team in 2013.

He continued that Raia felt if he wrote one big check to Bluewater and they wrote all the small checks, he wouldnâ€™t have to disclose all the voters receiving $50 checks.

“I delivered the payment to Bluewater, at an office in Clifton, directly to Yacco and he was provided a list of voters to write checks to,” Calicchio also said.

Under cross examination, Zegas constantly put Calicchio’s credibility under siege, honing in on the fact that the testimony he had given yesterday and today contradicted what he told a grand jury on June 5th, 2017.

Zegas said according to those transcripts, Calicchio stated he never had any knowledge of a VBM scheme in Hoboken, never gave a check to anyone who did not work, never told anybody who to vote for, never received a blank ballot and was unsure of Dio Braxtonâ€™s role in the 2013 campaign.

Additionally, Zegas also made it a point to mention that Calicchio had not filed any tax returns in two years, despite living in an affordable housing unit, and still owes approximately $9,000 to his attorney in this case.

Nevertheless, Agarwal took a few moments to reassert his position that Calicchio’s testimony this week was credible.

“I just wanted to tell the truth and come clean. It was the right thing to do,” Calicchio said after explaining he lied in order to protect himself and others like Raia “from situations like this.”

Brian Cardino, who was the senior elections clerk investigator in 2013, took the stand around 11:15 a.m. this morning and will resume testimony after the lunch break.