For hospitals and frontline healthcare workers, the fight against the coronavirus continues to be relentless, something that’s no different in Secaucus, where the head of the hospital is already looking forward at the possibility of immunity testing. 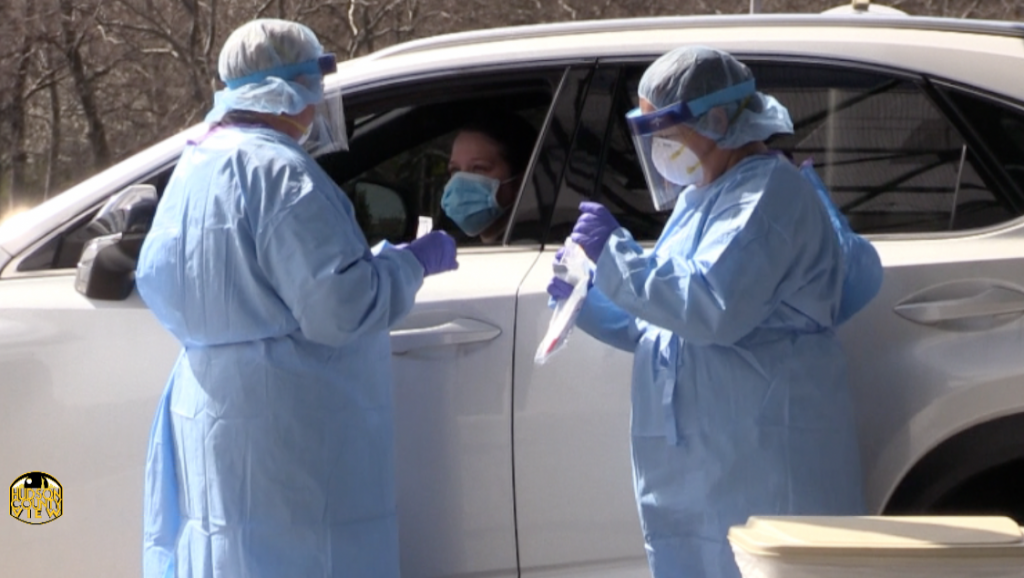 But for medical professionals on the front line, the months-long battle to flatten the curve may be the beginning of a fight against a little-known virus – as doctors look to find ways to prevent future waves of emergency hospital admissions.

At the Hudson Regional Hospital in Secaucus, a smaller community-based hospital seated near the Hackensack river, doctors and nurses are working day in and day out.

Dr. Nizar Kifaieh, the president and CEO of the hospital, said on a Zoom call this morning that while tri-state statistics point to a drop in volume of hospital admissions due to COVID-19, “we haven’t really seen that in our facility.”

As of last night, Secaucus reported 202 confirmed COVID-19 cases and 6 deaths as a result. There are currently 6,411 confirmed cases in Hudson County, while there are 54,588 cases statewide, according to the New Jersey Department of Health.

Nearly 2,000 New Jersey residents have died due to complications from the virus, while more than 100,000 people have died globally.

However, the Secaucus hospital has seen “some really good successes here with patients getting extubated, which is a great thing to report on,” Kifaieh said, referring to patients recovering and being taken off of ventilators.

“The number [countrywide] of patients that are surviving … after being put on a vent is very small … so we’re very happy to report we’ve had good successes with ventilator extubations,” he said.

But in the midst of the pernicious pandemic that has upended daily life for residents around the world – and has left 16.8 million Americans, or 11% of the county’s labor force jobless — top medical professionals are looking for ways to stave off new future waves of a virus that remains obscure for the scientific community.

The U.S. Centers For Disease Control (CDC) last week warned that the U.S. could see a second wave of the virus in the fall, which happened in 2009 with the swine flu.

Numerous testing sites have popped up throughout the state and in Hudson County. One is situated right outside the doors of the Hudson Regional Hospital.

The testing center in Secaucus is going “as well as could be expected,” said Hudson County Deputy Administrator David Drumeler.

He anticipated the site will have tested over 3,000 patients total by the end of today.

The site, meanwhile, has seen a consistent positive rate of 59% “which we’re very pleased with … that’s better than most of the testing sites,” he added.

Only residents experiencing the most prominent symptoms of COVID-19, a dry cough, a fever, and shortness of breath, can book an appointment at many of the local sites in the county.

While countries like South Korea mobilized the ability to test the population at-large early (and as a result have had success in containing the disease), the U.S. has been hamstrung in its fight by a lack of testing.

“Every single day we’re learning something new about how this virus behaves, and how symptoms are manifested and what happens with patients in terms of complications,” Kifaieh said. “There is a wide range of different symptoms…”

Drumeler said there has been no sign of decreases in the number of people inquiring about getting tested.

“I think there’s a lot of people throughout New Jersey who want and need to be tested … I’m not sure when that’s going to catch up, but all of the testing centers I know are doing their best to test as many as they can.”

Kifaieh cautioned against widening the eligibility of testing for now, but said that scientific community needs to start thinking proactively.

He said his facility is looking at acquiring the capabilities “to test not only for acute exposure, but also immunity status, which will be key here.”

Kifaieh also said there have been discussions with larger health care institutions on collaboration to be able to provide plasma therapy to its patients.

Still, there is not a lot of information about immunity status, or if patients who have been released could contract the virus again, similar to the seasonal flu, he added.

“The way you’re going to limit the spread of this disease later on is by making sure that all of the people that have not presented [symptoms] and have gotten tested are either because they are immune or because they still have the risk of getting exposed.”

“Some people may develop immunity and some people may not, so I would assume this [virus] would behave somewhat similar to other illnesses … We want to be able to limit the potential for extra spread.”

For now, he said morale in the hospital is high, but that there “is definitely a war going on and we’re fighting every single day.”

“What we’ve learned about this virus is things can change extremely quickly for patients,” Kifaieh said. “One minute your consistent and stable… and very quickly it might deteriorate … we’re telling everyone to stay home and practice social distancing, but if you’re getting sick, please, come to the hospital.”

“We don’t want people to wait until the last minute and then they end up coming too late.”