The Bayonne Police Department is searching for a man who destroyed a crucifix at a local church last night. 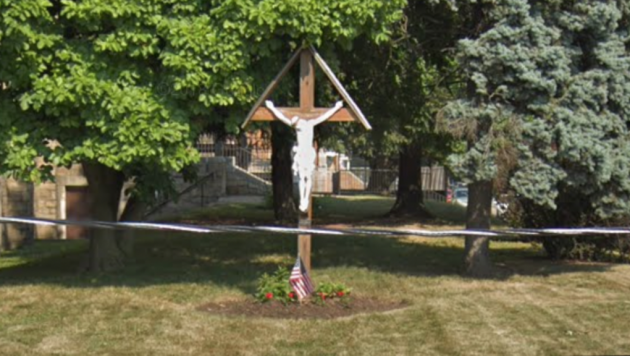 Yesterday at 8:45 p.m., Bayonne police officers responded to St. Vincent de Paul Church, located at 979 Avenue C, on a report of a “theft,” according to Police Lt. Eric Amato.

Upon arrival, officers were met by an individual who advised that she had observed a man break a crucifix bearing a statue of Jesus.

It was later learned that this man removed the crucifix from the ground located on the front lawn and threw it to the ground, causing it to break in half, authorities said.

The man then carried the broken crucifix to a perimeter, three-foot wall and began slamming the remaining piece of the crucifix against the wall, causing the attached statue of Jesus to break into numerous pieces, officials said.

He then allegedly picked up the remaining piece and threw it over the wall onto the sidewalk before fleeing the area. The crucifix is valued to be over $1,500. This incident of criminal mischief is under investigation.