Bayonne Mayor Jimmy Davis, a retired police captain, will receive nearly $169,000 as part of a payout that includes compensation for hundreds of unused hours for sick and vacation time. The numbers released by the city indicate that Davis is being paid for 807.5 banked vacation hours, 304 sick leave incentive hours, 370.5 remaining vacation hours and 175 hours for terminal leave.

Casais also said that under to the collective bargaining agreement that Davis’ contract was a part of, his first payment of $56,326.96 will be made within 60 days and the remaining two payments of $56,326.95 shall be made in the next two calendar years.

Hudson County View inquired about the status of Davis’ police payout on Wednesday, with Casais stating that the related paper work would be processed in the coming days.

Davis, who defeated Mark Smith in a closely contested runoff election in June 2014, retired as a police captain a few weeks later on June 30 – one day before being sworn in as mayor.

As mayor, Davis earns an annual salary of $72,000 and in March of last year, it appeared that he would be able to collect a $120,000 police pension thanks to a new bill that quickly moved through the state Senate.

The bill would’ve allowed any police of fireman that gets elected to office to be able to collect their pension and their salary as a public official, regardless of when they retired.

Current legislation only allows these circumstances due to “a bonafide severance of employment” that occurred at least 180 days prior to taking a new job at the same municipality/organization. The only exception would be if the retirement was “mandatory.”

â€œThe people made that decision: if they want a former police officer or fireman running for office, they expect him to run and get paid for maintaining that office,â€ Sacco told Hudson County View at the time, calling it a â€œglitch in the lawâ€ that forced retired police or firemen to choose between their pension or a salary in the past.

However, at the end of the day, the bill did not have the votes to make it out of the state Assembly (per NJ Advance Media) and has not been discussed ever since.

Coincidentally, Smith is also a retired police officer, but was able to collect both his mayoral salary and police pension since he took office in January 2009 and the current legislation didn’t take effect until 2012.

Despite this scenario, Davis was still able to collect a $120,000 pension after he won an appeal with the state pension board a year ago, which was upheld by the New Jersey Treasury Department’s Division of Pensions and Benefits in January (h/t The Jersey Journal). 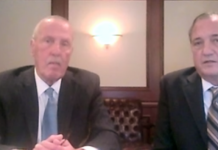 Arango: ‘Kopko is the man from Hudson that Gov. Christie needs...