Echoing what he said prior to last November’s election, Bayonne Board of Education candidate John Cupo says his vast experience in the business world could help make the school district’s $129 million budget more efficient.

“I feel that there’s a lot of waste in the budget itself. I think that the money that I save could be put to better use to other programs within the school system, things that are not working. And the things that are working, you just add more money to it and make it flourish,” said Cupo.

He clarified that while he feels the Bayonne public school district is doing “well” overall, every budget has five to 10 percent waste that can be eliminated.

In May, the Bayonne BOE approved a $129 million budget that came with a 2.78 percent tax increase.

He believes he is a prime candidate to aid in that process since in his younger days (he’s now 66), he was a real estate broker that had offices throughout Hudson County, at one point reaching 300 employees and being in charge of a budget “that encompasses millions of dollars on a daily basis.”

When asked why he decided to again pursue a seat on the board, Cupo said his first granddaughter, Sienna, was born just over a week ago and he wants to do everything in his power to make sure she grows up with the best education possible.

“Now more than ever, I think the input of myself into the school board to protect my grandchild, and all the other grandchildren and the parents of the district [is necessary],” Cupo stated.

Cupo also addressed the hot button issue of the teachers contract, something they have been without since June 30, 2015. The candidate said that if he serves on the board, he will push for a multi-year contract for the local teachers.

He added that the doctrine of necessity will not be necessary to force him to vote, since he has no relatives that work in the school district.

It took two votes for the board to decide not to renew the contract of Superintendent of Schools Dr. Patricia McGeehan, since the first vote was null and void since the doctrine of necessity was not used properly.

The candidate also stressed his commitment to the community, pointing out that he’s spent nearly two months giving the unnamed park on 442 Avenue C “a facelift” after he noticed it was dirty and covered in graffiti after acquiring a neighboring property.

He declined to say how much he has spent on the project, but said he is the only one who has provided funding to the effort.

This morning, Cupo called Hudson County View to express his displeasure with the November 8 ballot, where he squares off with Maria Valado and Charles Ryan for a two-year term on the board.

He claimed that print is too small and that the instructions were unclear, especially considering that the average voter spends just 20 sections in the booth.

“I think this ballot is a disservice to the people of Bayonne and will significantly hurt the number of people who select four candidates for the process,” Cupo said today.

In addition to the two-year seat, the Bayonne BOE also has nine candidates seeking three, three-year terms on the board on Election Day. 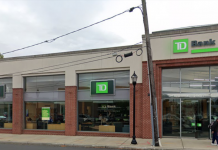