The Jersey City Board of Education race continues to heat up, as the “Education Matters” team is fighting with the “Change for Children” slate over a report card-style piece of campaign literature that said the current board and their allies have failed the district. 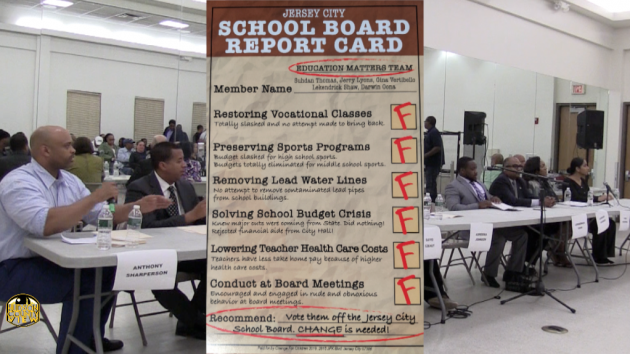 The literature in question, paid for by the Change for Children candidates, says that the Education Matters team has failed in at least seven areas that are critical to the public school district.

Specifically, they take aim at their main adversaries for cutting vocational classes, slashing high school sports, failing to remove lead from water lines, rejecting financial aide from City Hall during the budget criss, increased healthcare costs for teachers and “engaging in rude and obnoxious behavior” at board meetings.

Back in May, it appeared that as many as 400 school layoffs were in the cards, leaving many observers flummoxed when BOE trustees no showed a special city council budget meeting at the end of the same month, called specifically to discuss school funding.

Ultimately, Acting Superintendent of Schools Dr. Franklin Walker said in a July 19th letter to the council that “quick fix solutions” won’t work and therefore declined any city funding at the time.

Expectedly, the literature, which was placed on car windshields throughout the city this past weekend, recommends voting for change in order to remedy these issues.

“The Education Matters team is confident that Jersey City voters will focus on facts & progress rather than an irresponsible and unethical smear campaign and we send our gratitude to the hundreds of Jersey City residents who were angered by this fabrication and contacted us in response to it,” Greco said in a statement.

According to Greco, Trustee Gerald Lyons is the Board Chair of the Careers/College committee while Board President Sudhan Thomas, who serves on the Board of Directors of
the New Jersey SchoolÂ  Board Association, was part of a statewide task force that brought out a comprehensive report on educational opportunities for the non-college bound learner for adoption by the 550 school districts in New Jersey.

He also made note that the school board announced earlier this year that a career and technology education (CTE) middle school is on its way to the south side of the city.

While the Jersey City BOE did initially cut high school sports as part of a desperation move to close a $120 million budget gap, Greco said that both middle and high school sports are fully funded and new shared services agreements with the city should keep them that way.

Furthermore, Greco stated that the incumbents are closely monitoring lead remediation in all of the schools, that Thomas led the way in filing a lawsuit against the state for costing the district over $750 million in funding and that the district’s current insurance plan will save taxpayers roughly $25 million.