Two attorneys representing Al Alvarez in the probe into how he was hired by the New Jersey School Development Agency are maintaining that his relationship with Katie Brennan was consensual and that her allegations “devastated his career.”Â

â€œDespite the very public and political attention this case has garnered, two separate and independent law enforcement investigations have now come to the same conclusion: That there is no basis to pursue criminal charges,” his attorneys, John Hogan and Stacy Ann Biancamano, said in a statement today.

“Although he has now been cleared by two independent investigations, his vindication seems conciliatory when compared with the damage that has already been caused. These unsubstantiated allegations led to Mr. Alvarez being unfairly forced to resign and have devastated his promising career, not to mention the emotional toll this process has taken upon him and his loved ones.”

The remarks come a day after the Middlesex County Prosecutor’s Office came to the same conclusion that their counterparts in Hudson County did: that there was not enough evidence to charge Alvarez with a crime.

According to Hogan and Biancamano, the events that occurred on the evening detailed at Brennan’s Jersey City apartment in April 2017 were consensual and that there is still no “credible evidence” to prove otherwise.

Of course, Brennan’s attorneys saw it a different way, claiming that their client continued to be denied justice.

McClure further stated that the MCPO did not contact Brennan in any way before publicly releasing their findings, with her other attorney Alan Zegas, called the MCPO’s decision “outrageous,” noting they did not meet with any witnesses named in Brennan’s civil complaint against the state. 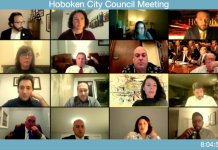