Hoboken Mayor Dawn Zimmer and 1st Ward Councilman Mike DeFusco are clashing over the acquisition of the city’s Union Dry Dock property, with the mayor pushing for eminent domain, while DeFusco is calling for “a good faith negotiation” after the mayoral race. 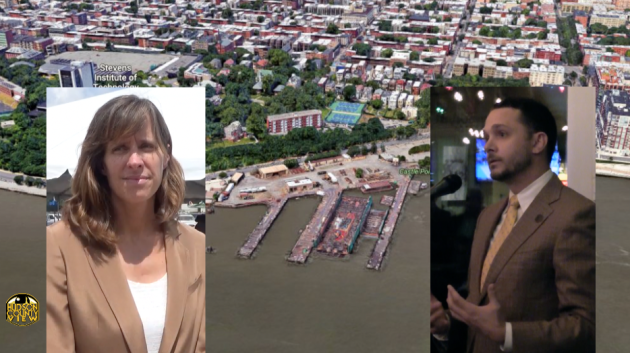 â€œIn my experience with acquiring Block 12 for the Southwest Park and the 6-acre BASF property in Northwest Hoboken, it is not possible to acquire property without the City Council’s authorization for eminent domain,â€ Zimmer said in a statement earlier today.

â€œGiven recent new factors that have come to light, it is important to move forward with this process at this time to expand our City’s waterfront parks.â€

As a result, the city plans on adding the eminent domain agenda item to the agenda for the October 4th council meeting.

The last time Zimmer urged the council to approve a measure, advocating for a new Suez Water deal at the September 7th meeting, tensions quickly escalated and the item ended up being pulled.

A September 22nd letter from Union Dry Dock counsel James J. Burke, addressed to Joseph Maraziti, Jr., says that his client cannot “engage in active negotiations with the City of Hoboken to sell the property” at this time.

Union Dry Dock is located on Sinatra Drive between 9th and 10th Streets and is essentially the city’s last waterfront property that hasn’t been developed.

DeFusco, who is one of six candidates running to succeed Zimmer, introduced a plan last month to turn the Union Dry Dock property into “floating pool and urban beach.”

In a statement released today directly in response to Zimmer, the councilman mocked Zimmer and Councilman-at-Ravi Bhalla, who is also running for mayor with Zimmer’s backing.

â€œAfter nine years in office, itâ€™s great to see Mayor Zimmer finally come to realize how important it is for the city to acquire the Union Dry Dock site in the last few months of her term,” began DeFusco.

“However, her decision to abandon any pretense of a fair negotiation and move immediately to eminent domain proceedings would plunge us into yet another costly litigation with a city property owner.”

“As weâ€™ve seen time and again, this approach doesn’t always result in a timely acquisition of property, as evidenced by the decade-long process of acquiring the recently opened Southwest Park, and can lead to outrageous legal fees our taxpayers have been exposed to in ill-fated court battles like the Monarch development.”

DeFusco concluded that the “sue first, negotiate later” approach frequented by Zimmer and Bhalla would be ineffective here, noting that his understanding was Union Dry Dock was open to “a good faith negotiation” after the November 7th election.

A city spokesman did not respond to DeFusco’s criticisms.

Bhalla has also introduced a plan for a city-run pool as part of his recreation agenda and intimated during a September 8th appearance on Hudson County Review Live that DeFusco’s pool plan wasn’t realistic.

The Fund for a Better Waterfront, whose goal is to have a “contiguous public park along the Hudson River,” tweeted that they Zimmer’s approach at this stage is “questionable.”

The @CityofHoboken needs to learn collaboration with other stakeholders. Threatening eminent domain at this stage is questionable. #hoboken https://t.co/cfKXsmLbxW

How much will $230M Rebuild by Design project impact Washington Street?