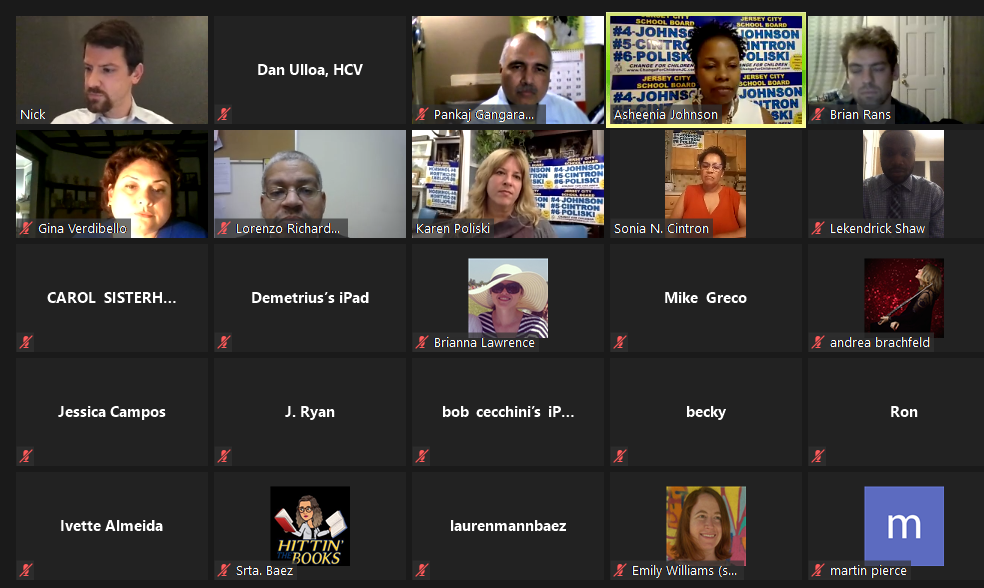 Three seats are being contested, with all six candidates seeking three-year terms, with the incumbents Board President Lorenzo Richardson, Vice President Gina Verdibello, and Trustee Lekendrick Shaw running for re-election on the “Education Matters” ticket.

For the second year in a row, they square off with the “Change for Children” slate, which consists of Asheenia Johnson, Sonia Cintron, and Karen Poliski. However, this time around, there are no independent candidates in the race.

“I am running because I believe there’s a lack of leadership,” Johnson said. She said the schools have been operating chaotically, and COVID was handled poorly.

“I understand what the teachers are going through,” said her running mate Cintron, who has a background as a substitute teacher and in financial services.

“I am the community. I am you … We have not only rolled up our sleeves; we’ve been touring facilities and meeting with parents,” noted Shaw, who is a lifelong Jersey City resident who attended the public schools.he added.

“We are very close to getting this district back to local control and making sure we have the adequate funding in light of the state cuts. We have overcome major budget cuts that did not have any major layoffs at all,” he pointed out.

“We’ve been in touch with community twice a month to get input,” Verdibello added.

Verdibello added they have done everything possible to ensure that the school district has been following the safety guidelines laid out by the U.S. Centers for Disease Control (CDC) and local health department.

“We’ve done everything we can to support the community,” Shaw explained.

Johnson said before bringing students and teachers back to school, they need to make sure the HVAC air system is working properly.

“We’re on the ground and letting them there needs to be an increase in facilities,” Shaw said in response.

On the point of reopening, Poliski said it was upsetting the board was initially planning to reopen schools as if there were no pandemic. She said push back from parents was the only thing that caused them to change their stance.

She added that the school district needs to train parents on using remote learning platforms in their native languages.

“Every other school, they’ve all had laptops for years … We need to look to the future.”

Cintron stated parents have complained no one was in a school building a week before school to help cope with issues related to Chromebooks. It was not the first time that issue has been raised in a public forum.

Poliski said there should be more transparency. Administrative costs should be examined to trim the budget since she does not want to reduce the number of teachers nor their salaries.

“Right now, it’s sad that teachers are spending their salaries on supplies,” she said.

The first time candidate ended up being the first one to throw a haymaker at her opponents, citing that the current leadership backed by the Jersey City Education Association cannot be trusted after the “cash for contracts” scandal that ensured former Board President Sudhan Thomas.

Last year, the New Jersey Attorney General’s Office charged Thomas with accepting $35,000 in cash bribes in exchange for offering a cooperating witness a contract with the BOE.

He also faces separate charges from the U.S. Attorney’s Office for allegedly embezzling $45,000 from the Jersey City Employment and Training Program while serving as the agency’s acting executive director.

Thomas ran on the five-person Education Matters team last year and faced both criminal accusations after his re-election bid came up short.

Verdibello defended Thomas, stating that despite his current legal troubles, he tried to make be a difference maker for the school district, for example, convening meetings and eventually having every school tested for lead in the water pipes.

Shaw said regarding the budget, they needed to make difficult decisions and tried to invest in education in underfunded areas.

“But by no means was it an easy decision,” he said.

Richardson said the budget is posted online, as were previous budgets, and it is possible to track the spending online, therefore the process is transparent as can be.

He said they have been looking for new revenue sources to cope with the $50 million budget gap that had to be met to raise in a time frame needed to deliver a balanced budget to the county.

“We put the first children first,” Verdibello said, noting people asked for their taxes to be raised to fund the schools.

Johnson said raising taxes should be a last resort, adding, “People would like to see some transparency,” ignoring what Richardson had said.

She said it’s hard for taxpayers to pay an increased tax if they don’t know if every single dollar is being spent ethically.

“Change takes time … We do not manage the superintendent. We approve things,” Verdibello stated.

Poliski said grants and corporate sponsorship would be an innovative way to cope with budget shortfalls.