With the vote for the next chair of the Hudson County Democratic Organization just over three weeks away, candidates Amy DeGise and Brian Stack are trading blows over voter intimidation claims related to the race.Â 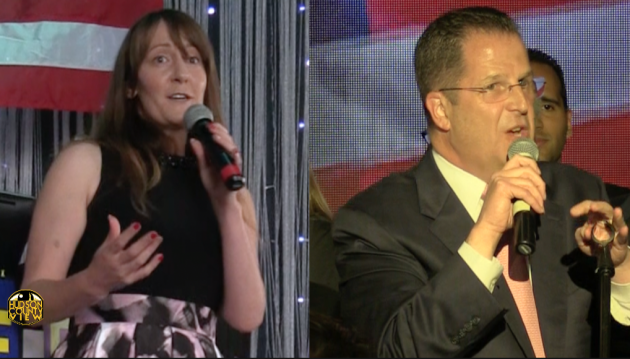 “I realize that the self-serving political machine is attempting to intimidate committee members who hold County jobs. This should never happen – this is outrageous and an act of desperation,” Stack, the Union City mayor and state Senator of the 32nd Legislative District, wrote in a mailer that went out over the weekend.

Stack’s claim was in response to DeGise, a Jersey City Board of Education trustee and the daughter of Hudson County Executive Tom DeGise, accusing Stack and Jersey City Mayor Steven Fulop of trying to bully committee members into resigning.

In light of Stack’s counterpunching, the younger DeGise stood by her initial remarks and said she has a simple solution to the problem – rather than just trading verbal jabs.

“Three committee people have told us that they were approached by Mayor Fulop and his people and asked to resign just in the past week,â€ Amy DeGise said in a statement.

â€œMayor Stack says that he doesnâ€™t believe this is true and that he would never condone it under any circumstances. Therefore I am calling on Mayor Stack to agree that no vacancies caused by a resignation after May 8 should be filled by any Hudson County Democratic Municipal Committee on either side. If Stack is sincere, he should have no problem joining me in this declaration.â€

Stack was not immediately available to say whether or not he would take his upcoming political opponent up on her offer.

The HCDO will vote on their new chair on June 12th at a time and location yet to be determined by the outgoing chair, former state Assembly Speaker Vincent Prieto.

Op-Ed: ‘We live in a city where people are afraid of the mayor’s wrath,’ Jersey City challenger says