The theme of the evening at West New York Mayor Felix Roque’s fundraiser last night was burying the hatchet with old political foes for the sake of the betterment of the town.

At packed room at La Reggia in Secaucus with the usual North Hudson mainstays of the Hudson County Democratic Organization, with even U.S. Sen. Bob Menendez (D-NJ) making a brief appearance, arguably the biggest surprises of the evening were former Freeholder Jose Munoz and WNY Board of Education Trustee Matthew Cheng – who have opposed Roque in several elections in recent years.

Additionally, Ralph and Myrli Sanchez attended the event. Myrli Sanchez was a candidate for the West New York United ticket headed by then-Commissioner Count Wiley last year, while Ralph Sanchez served as the campaign manager of the group.

Back at the podium, after brief remarks from Commissioners Cosmo Cirillo, Susan Colacurcio, Margarita Guzman and Gabriel Rodriguez, the state representatives from District 32 all approved of the direction West New York is heading in under Roqueâ€™s leadership.

After taking the time to individually praise the abilities of all four of his commissioners, Roque personally thanked several friends and family members, including Manny Diaz – who bridged the gap between West New York and North Bergen.

Joey Muniz helped organize the event and served as the master of ceremonies. 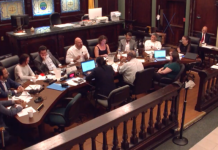