A former Weehawken assistant recycling coordinator, who still works for the township, settled a sex discrimination lawsuit earlier this year for $49,500 – which wrapped up a Hudson County Superior Court lawsuit that was filed back in January 2012, court documents show.Â

Through her attorney Louis Zayas, Pilar Bardroff alleged in the lawsuit that the township created a sexist work environment, which included graffiti of a man’s genitals and a woman’s breasts on a wall visible outside of her office.

The graffiti was reportedly removed shortly after the lawsuit was filed.

The lawsuit also says that Bardroff was passed over for the role of recycling coordinator in early 2008, with a male counterpart who was allegedly less qualified than her being selected for the position.

Around the time the suit was filed, Zayas told me that Bardroff would likely net “$1.1 to 2.1 million” from the lawsuit, while Weehawken Mayor Richard Turner said the suit was “frivolous nonsense that is an attempt at public blackmail” (h/t The Jersey Journal).

Public records show that Bardroff has been working in Weehawken since 1992 and makes approximately $36,200 annually.

According to the settlement, which is dated January 4, 2014, Bardroff is entitled to $45,000 as part of the mutual agreement, with an additional $4,500 being allocated for attorney’s fees.

Furthermore, she agreed to a transfer to another department, at the township’s choosing, as a clerk/typist where her seniority and benefits will not change, the settlement says.

Finally, the township of Weehawken does not admit to any wrongdoing as part of the settlement.

Although the settlement is nearly a year old, no media outlet has given an update on the legal matter until now.

A copy of the lawsuit and settlement can be read here. 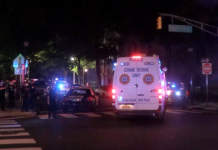 Prosecutor: Jersey City man arrested in Pennsylvania for Bostwick Avenue murder in May