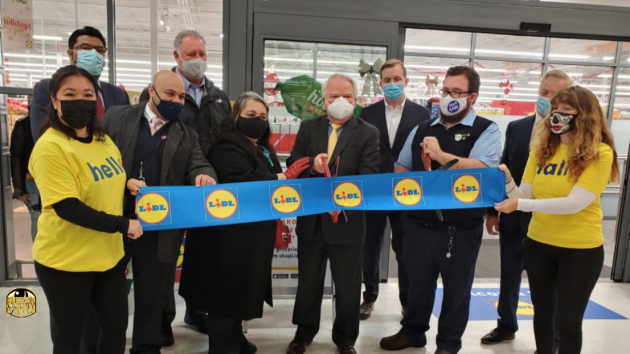 “I want to wish Lidl well. I think you made a great chance coming to Hudson County,” said Sires.

He also noted that the demand for a supermarket within walking distance is high in densely populated neighborhoods such as this one – which has been without a grocery store since the Acme left around a year ago.

“We are excited to welcome Lidl to Weehawken. This is a great fit for the community, and we look forward to discovering what makes Lidl unique,” Turned stated.

“The grand opening comes at a time when we are really relying on our local food markets. This opening has been highly anticipated by our community.”

Turner added that thousands of residents don’t have a car need a place to get high-quality food, especially during the current COVID-19 pandemic.

Furthermore, Township Manager Giovanni Ahmad said the site was initially a reservoir that was filled in and made into a Pathmark supermarket before it became an Acme that closed about a year ago.

He continued that this is the largest supermarket in the area Palisades/North Hudson areas that will will attract patrons from North Bergen, Union City, and West New York – along with Weehawken.

Additionally, Store Manager Cody Smith said there would be 50 to 80 employees at the establishment – including part-time employees.

Lidl offers wages and benefits for its team that are above the industry standard, having recently announced they would expand healthcare coverage to all workers, including those working part-time, regardless of the number of hours worked.

At the grand opening, customers were able to take advantage of special offers: the first 100 customers were presented with a special gift card ranging from $5 to $100 each.

Shoppers were also eligible to enter a contest to win a $500 Lidl gift card.

This year, for the second consecutive time, Food & Wine Magazine ranked Lidl among its Top 10 U.S. Supermarket rankings. It was ranked ahead of retailers like Trader Joe’s and Costco.

A study from UNC Kenan-Flagler Business School observed that prices on Lidl’s award-winning assortment were up to 45 percent lower than nearby national grocers.