Peter Franco, a Bayonne resident running for the 1st Ward city council seat, was convicted of having sex with a child in 2008 at a court-martial, according to documents obtained by HCV. 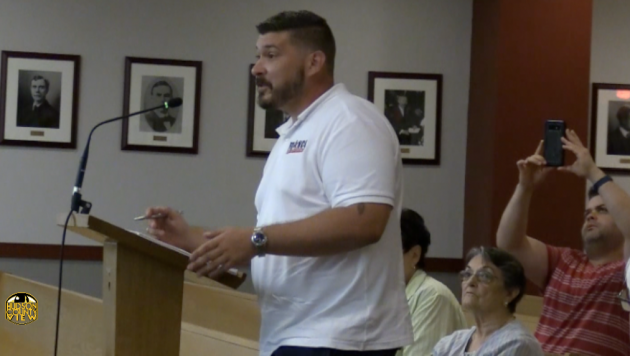 Franco, 36, was convicted at a general court-martial on Aug. 13, 2008 at Fort Hood, Texas after being found guilty of having sex with “a child who had attained the age of 12 but was under the age of 16, by force and without consent” in July 2007, according to documents from the U.S. Army obtained via a Freedom of Information Act request.

He had initially been charged with three offenses at the court martial, but was acquitted of the two other charges, the records show.

Franco was sentenced to a reduction in rank, the forfeiture of all pay and allowances, and served three years in confinement, army records show. He was later given a bad-conduct discharge.

The Bayonne resident served in the Army from April 2006 until he was convicted in 2008, according to William Sharp, a public affairs officer with the Pentagon’s Media Relations Division.

He had several assignments in Missouri, Oklahoma and Texas, and was awarded several accolades during his tenure, including the National Defense Service Ribbon, Global War on Terrorism Service Medal, and the Army Service Ribbon.

Franco now works as an account manager in Bayonne and has been active in the community as well as the local political scene.

For several years, he volunteered at a soup kitchen at the All Saints Catholic Academy, but last week was barred from volunteering, according to a post on his Facebook blog.

The reason for the falling out was not explained, but his Facebook post indicated that the situation came to a head when resident Mike Morris took Franco’s conviction up with the Archdiocese of Newark.

Through a spokeswoman, the archdiocese said they could not comment “on individuals involved in any ministry, or on the presence, absence, or results of any criminal background checks on individuals.”

Franco, in a TAPInto Bayonne story published yesterday, had said he was unaware of any background check requirement, but said that he had passed two background checks — “one paid for at his own expense” and another one which was conducted by a local pastor, where Franco provided the necessary information, TapInto reported.

Furthermore, it is unclear why he does not appear on any New Jersey sex offender registry lists.

The state’s sex offender internet registry excludes any information about offenders determined to present a low risk of re-offense, according to the New Jersey State Police, where a spokesman said “an offenderâ€™s final classification is determined by the county prosecutor in which they reside.”

Additionally, neither the Hudson County Prosecutor’s Office or the Bayonne Police Department confirmed or denied that they are aware of the conviction.

Ray Worrall, a spokesman for the HCPO, said that “New Jersey law provides for a system of community notification only about certain sex offenders and prohibits a county prosecutorâ€™s office from notifying the community about all sex offenders.”

“We cannot comment on the specifics of any Meganâ€™s Law court case because, in so doing, we would be making an improper community notification. So by law, the Hudson County Prosecutorâ€™s Office is unable to provide any further answer to an inquiry about a specific individual.”

Franco is most well-known for being outspoken against Mayor Jimmy Davis’ administration, specifically with their policy of spurring development by offering lucrative tax breaks.

The council since 2014 has approved well over 40 long-term tax breaks for residential development, bringing hundreds of these units onto plots of land that had remained vacant for decades – an issue Franco has already campaigned on.

Prior to that, he served as a top campaign consultant to Bayonne mayoral candidate Anthony Zanowic in 2014, but was fired for sending racially-charged text messages to a supporter of former Mayor Mark Smith’s campaign, according to a report from The Jersey Journal.

Davis won that election and has been in office ever since.

Franco announced his run for the First Ward council seat in June and officially filed petitions for his candidacy earlier this month.

He is vying against two other candidates and the incumbent, Neil Carroll III, who was appointed to his seat by the city council to replace former councilman Tommy Cotter.

Cotter in November 2018 announced his resignation just six months after winning a second term. Davis then announced he would serve as the head of the city’s Department of Public Works.

Carroll is the youngest councilman in Bayonne history at 27 years old, and is the grandson of former Freeholder Neil Carroll, Sr., as well as the nephew of former Mayor Mark Smith.

Vainieri has the support of all 12 mayors, Tom and Amy...