U.S. Rep. Albio Sires (D-8) is paying tribute to U.S. Rep. John Lewis (D-GA), a civil rights icon before being elected to the House in 1987, who passed away last night due to pancreatic cancer.

“To have a titan of justice and civil rights like John Lewis as a colleague was a privilege that cannot be overstated. He truly was a good person who wanted us, and our nation, to be better tomorrow than we were yesterday,” Sires said in a statement.

“His fight lasted his entire life and I was honored to work with him on legislation, protest for gun control on the House Floor with him, and I will continue to think of his optimism, dedication, and courage in the days ahead. In the future, when people talk about great Americans, John Lewis will be at the top of the list. Today, we grieve with John’s family, friends, and all those who he touched during his life of activism, and then, we make good trouble in his name.”

He added that the entire country, not just the House, is a better place today because of Lewis’ remarkable body of work.

Along with civil rights leaders such as Martin Luther King, Jr., Lewis was a part of the “Big Six” that led the 1963 March on Washington – where King delivered his infamous “I Have a Dream” speech.

Lewis achieved national fame for spearheading the Selma to Montgomery marches in 1965, where over 600 people marched over the Edmund Pettis Bridge in Selma, Alabama.

He was badly beaten by Alabama state troopers when the group refused to disburse, suffering a fractured skull that left permanent scars.

After scoring an upset victory to win Georgia’s 5th Congressional District seat in 1986, Lewis was re-elected a stunning 16 times, getting below 70 percent of the vote just once in 1994.

In 2011, then-President Barack Obama (D) awarded Lewis a Presidential Medal of Freedom for his lifetime commitment to justice, referring to him as “the conscience of Congress:” a nickname that stuck for the rest of his life. 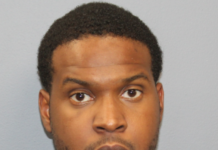 Police: Man pulled over for tinted windows in Secaucus busted with loaded handgun