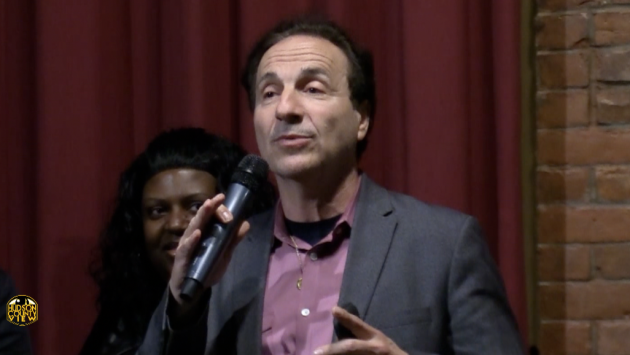 Comparatively, he reported raising just $22,500 for the mayoral contest in the last four weeks leading up to the election.

During that same time frame, Romano spent $4,500 on media buys with Joey Creative, gave $8,500 to his Team Romano account and made a $1,200 donation to the Brian Stack Civic Association on October 27th, the report says.

Back in July, Romano inadvertently entered a blood feud with Stack, whose Senate district includes Hoboken, after a longstanding political nemesis attended a fundraiser for “Stick.”

However, Stack appeared to let bygones be bygones days before the November 7th municipal electionsÂ as he and Romano took several photos together at the annual Stack civic association extravaganza at Schuetzen Park.

As it turns out, Romano also cut a fairly generous check to help ease the tension.

At the end of the day, the freeholder, who appeared on the November 7th ballot twice, spent more than he could bring in, since although he reported a cumulative fundraising total of $184,065, his outstanding balance was -$4,378.

Furthermore, a review of his Team Romano account, also filed with ELEC on November 29th, shows that the retired police captain shelled out $21,000 after the election to cover previous expenses.

The loan came on five different dates between November 14th and November 24th, according to the ELEC filing.

Based on the report, this was slightly less than what the team reported raising in the last month leading up to the election: $26,800.

The Team Romano account, which reported raising $82,725 overall, also paid another $3,820 to Joey Creative for media on November 5th and ultimately had an outstanding balance of -$12,124.

Between the two accounts, Romano reported spending at least $76,702 of his own money on the mayoral campaign.

Speaking to Hudson County View over the phone, Romano admitted he underestimated how expensive the race would be, but said he didn’t regret taking a shot at the mayor’s seat.

“I thought I had the support of many people and as I got into the race, I didn’t realize how expensive it would be, I thought I would’ve had more financial support but I didn’t,” Romano said.

“Would I do it again? If I didn’t run in this race, I’d probably be second guessing myself for the rest of my life. That said, it’s not over yet, I’ve still got bills that need to be paid.”

“He came in a distant third place behind Mayor-elect Ravi Bhalla and 1st Ward Councilman Mike DeFusco in the mayoral contest, but easily cruised to re-election as freeholder, securing another three-year term on the county board.

As we exclusively reported yesterday, over half a million dollars was spent on Bhalla’s campaign leading up to his historic win.