Retired Jersey City Police Det. Ramon “Ray” Regalado has lost a weeks-long battle with COVID-19, with condolences pouring in from friends and family today upon hearing the news of his passing.

“Good morning my FB family and friends. As a lot of you are aware I’m fighting this covid. It’s a tough battle but I’m fighting it,” Regalado, 49, wrote on Facebook on July 22nd.

“I appreciate all of you who have called, messaged and prayed. Thank you!! I’ll get through this.”

Unfortunately, Regalado was never able to make a recovery, with thoughts and prayers being offered to his family this afternoon after he was still receiving well wishes as recently as Monday.

“I’m very sad to hear of your passing my brother. You were a genuinely good man. Always had a smile on your face and never a bad word from your mouth,” Alexander Rivera posted on his Facebook page.

“Condolences to the family. You were a wonderful man and community leader. RIP,” added Lenore James.

Regalado joined the Jersey City Police Department in 1995 and announced his retirement on January 31st of this year.

He had become politically active in recent years, unsuccessfully running for council-at-large in 2013 and then state assembly in 2015. He also helped fundraise for Mayor Steven Fulop’s re-election bid in 2017.

Additionally, Regalado was the chairman of the Latino Caucus of Hudson County and was heavily involved with the city’s Dominican community, in particular their annual Independence Day Celebration. 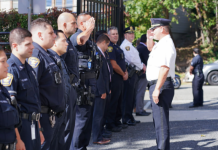