The Hudson County Prosecutor’s Office has identified the Jersey City police officer who died from a gunshot wound to the chest last night as Ramon Torres.

Yesterday at approximately 8:00 p.m., the Jersey City Police Department received a report of an officer shot inside a Woodlawn Avenue residence. Upon arrival, responding police officers found a male in a lifeless condition with a  gunshot wound to his torso, Hudson County Prosecutor Esther Suarez said in a statement.

The deceased, who has been identified as Officer Ramon Torres, 32, was located in his first-floor residence at 340 Woodlawn Ave. First responders administered aid to Torres until Emergency Medical Services transported him to the Jersey City Medical Center, authorities said.

Torres was pronounced dead at the JCMC shortly after 9:00 p.m. The cause and manner of death is pending the findings of the Regional Medical Examiner’s Office, officials said.

Sources, who spoke under the condition of anonymity since they were not authorized to speak on the matter, told Hudson County View that early indications are that the gunshot wound was self-inflicted.

Anyone with information is asked to contact the prosecutor’s office at 201-915-1345 or to leave an anonymous tip on their official website at: http://www.hudsoncountyprosecutorsofficenj.org/homicide-tip/. 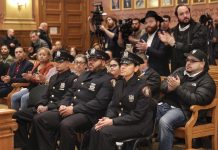 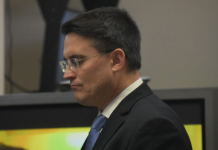 Poll: With battle lines drawn, who will win North vs. South...