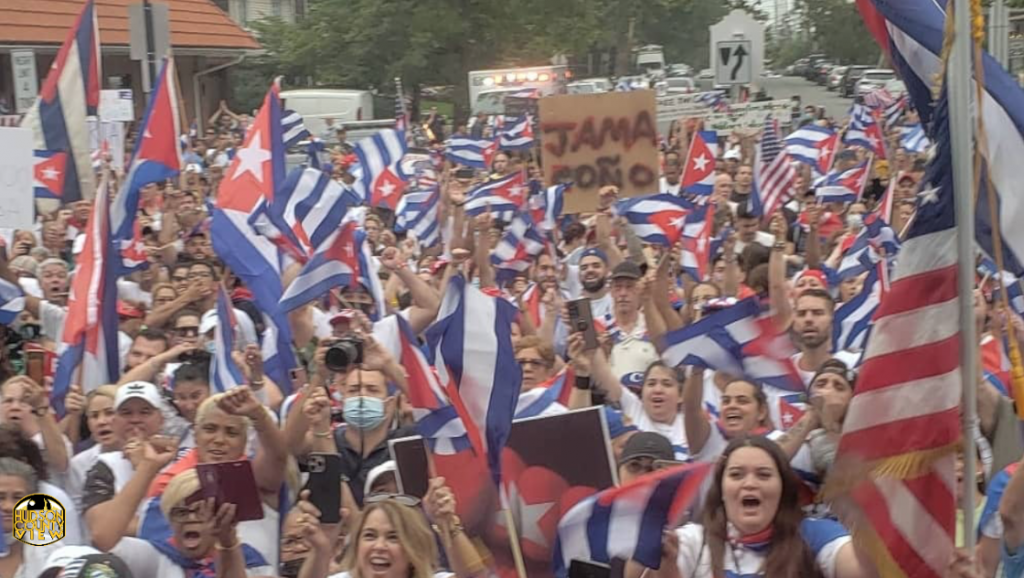 Assemblyman Pedro Mejia (D-32) exclaimed in Spanish “Long live Cuba. We want liberty!,” which was a theme that was consistent throughout the evening.

Prior to the march from 79th Street and Bergenline Avenue to West New York Town Hall, HCV caught up with Sacco, also the North Bergen mayor, who applauded the excellent turnout – likely over a 1,000 people – before explaining what he feels the next steps should be.

“The people are starving. The hospitals are closed, they’re living in sub-human conditions:  Something has to be done,” he said, adding that military force should be used to free the Cuban people of the current communist regime.

Stack, also the Union City mayor, was even more adamant about the U.S. taking swift action.

Stack also pointed out that the U.S. liberated Kuwait in the 90s and should taken similar action in Cuba decades ago, exclaiming that “we have a great opportunity now.”

“I have uncles, tios, who never made it out of Cuba. They went to prison because they wanted freedom. So today we come together for a free Cuba now!” said North Bergen Commissioner Allen Pascual.

“As mayor, it gives me great pride to see the whole community supporting the cause of Cuba,” West New York Mayor Gabriel Rodriguez said in Spanish.

He also noted that U.S. Rep. Albio Sires (D-8) who held a press conference Monday with Rodriguez highlighting the protests against the Communist regime, could not be there.

Interestingly, Sires, who sits on the House Committee of Foreign Affairs, said at the time he didn’t support U.S. military intervention, as HCV first reported.

A video truck proceeded the marchers with a message in Spanish that read “Now begins the count of the hundreds lost and detained in Cuba.”

The marchers chanted “Si se puede,” which means “Yes we can.” Others chanted “Intenvencion” and “Cuba Libre,” calling for a free Cuba.

The marchers were so passionate, they barely stopped chanting when there was a call for silence for payers amidst speeches.

Furthermore, others chanted “If Cuba is in the streets, New Jersey is there!” in Spanish.

While the North Hudson branch of the Hudson County Democratic Organization spearheaded the event, there was also a Republican group of marchers led by GOP gubernatorial nominee Jack Ciattarelli.

” … After supporting the rhetoric and bigotry of the Trump administration, Assemblyman Ciattarelli is now attempting to use our vibrant Cuban community as a pawn for his own political purposes,” they said in a joint statement.

“We wholeheartedly reject this opportunistic way of thinking, and won’t allow a politician with a self-serving agenda to weaponize the Cuban people’s suffering and drag us back to the days when our diverse communities were put into silos and left behind.”

While Ciattarelli, who called out Gov. Phil Murphy (D) for not taking a stance on Cuba earlier this week, did not respond to the HCO, he acknowledged his presence at the rally and said he was “honored” to attend on social media.

“Our sisters and brothers in Cuba are being denied basic human rights. I was honored to stand by hundreds of New Jersey Cuban Americans today at the Cuban Liberation Rally in North Bergen. We must stand united as Cuba continues to fight for freedom and democracy,” he wrote.

Portions of the rally streamed live on our Facebook page and can be viewed below:

Stevens asking students to move out of campus housing by next...