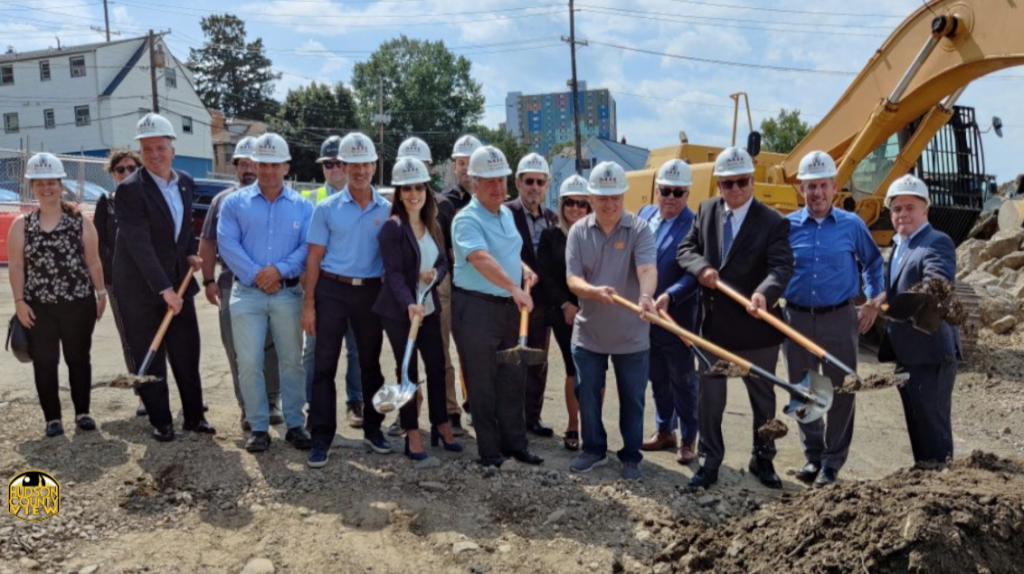 The new tower will have 61 one-bedroom units reserved for section 8 tenets, those 55 and older, and physically disabled adults.

“We talked about this for a long time, and this never seemed to get off the ground,” state Senator (D-32)/Mayor Nick Sacco said.

He praised the collective effort of all those involved who helped bring the Meadow Hill affordable housing complex project to fruition.

The complex will be next to the affordable housing complex for seniors at 6800 Columbia Ave. on the Palisades overlooking the Meadowlands, MetLife Stadium, and the American Dream mall.

“I’m ecstatic to see, probably it opening in two years when it will be done. This is really a great thing … I thank each and every one of you here today,” Sacco added.

“Everybody stepped up and made this possible. This is going to be a wonderful thing for North Bergen and for underprivileged people. That’s what’s it all about.”

He also said residents would pay 30 percent of income for rent to live in the new building if they qualify for Section 8 housing, with the project made possible with county, state, and federal funds.

Furthermore, Sanzari noted that the majority of the funding came from a loan from the New Jersey Housing and Mortgage Finance Agency (NJ HMFA), which was instrumental in financing the project, along with private investors interested in receiving tax credits.

Sanzari thanked Hudson County Board of Commissioners Chair Anthony Vainieri (D-8), who was present, for securing about $2 million from the county’s community development budget for the project.

“This project had, as you can imagine, with COVID, and construction, and you’ve seen the hill – so many issues – we can’t have it done without an unbelievable team. We were dead stopped on three different occasions,” Alpert Group President Joe Alpert said.

Alpert continued that they responded to the Request For Proposals (RFQ) and were chosen.

He explained his company also built the Teresa Ferraro Senior Housing Complex on 62nd street in North Bergen about 20 years ago.

However, the new Meadow Hill project had great difficulties before construction began as far as financial, physical, and timing issues are concerned.