The Township of North Bergen held a ribbon cutting ceremony to mark the opening of the newly renovated Policemen’s Memorial Park on Union Turnpike earlier today. 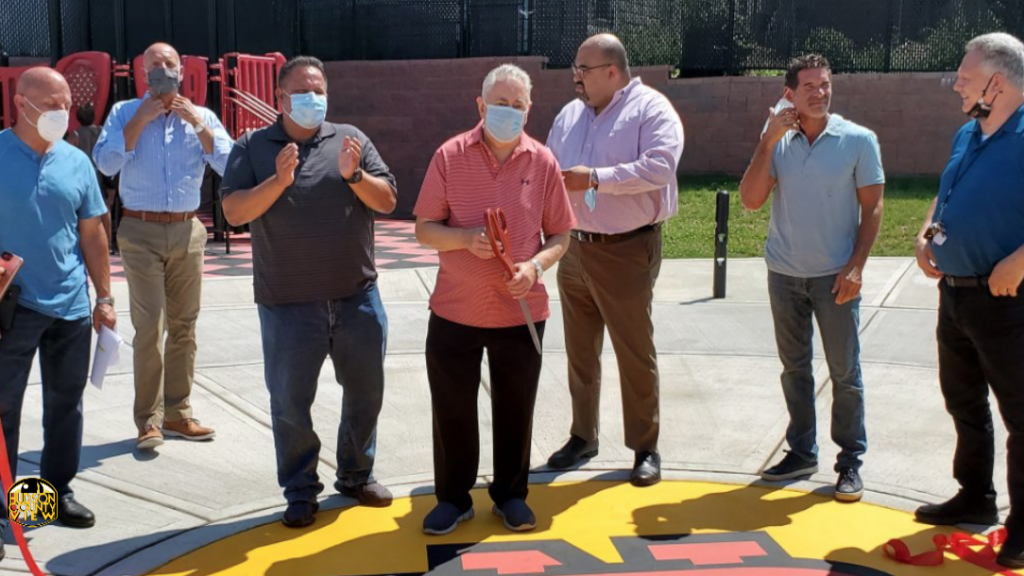 The park now includes a fountain sprinkler system for children to play in on hot summer days, along with a more traditional playground area with a rubberized ground surface, swings, a basketball court, several benches, and a dog park.

North Bergen invested nearly $4.8 million into renovating the town’s parks, including building the brand new park on Paterson Plank Road. The majority of the funding for these projects came from state and federal grants, officials said today.

Pasqual also credited Township Administrator Chris Pianese for finding the funds to complete the park’s renovation, as well as the park’s engineer.

Pianese then explained that North Bergen Township received grants from Hudson County Open Space grant for $500,000, and then the town budgeted for the remainder of the $1.2 million that it cost.

“This park has been in the works for two years. It hit a few snags here and there, but we got here,” said Pianese.

Construction of the park began at the end of 2018. But it was halted due to some issues, the COVID-19 pandemic among them.

“It’s actually great to be here. I want to thank the Parks Department, (Buildings and Grounds Supervisor) Joe Rotundi. They did a great job through the process, and of course, Chris,” added. Parks and Recreation Commissioner Hugo Cabrera.

He further stated that the town plans to build a gazebo in the park next year to provide shade, which will be in next year’s budget.

The park is about an acre on the corner of Union Turnpike and Grand across from the Palisades cemetery and it has been around since the 1980s.