The North Bergen Board of Commissioners and Hoboken City Council approved resolutions expressing support for the Ukraine during their respective meetings last night. 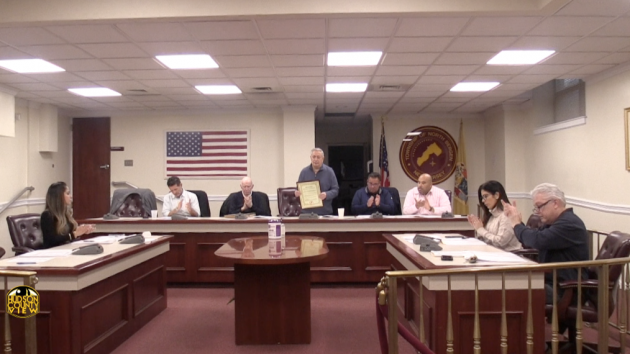 “Whereas, Ukraine proclaimed it’s independence from Soviet Socialist Republic on August 24th, 1991 and adopted its constitution in 1996 and has been an independent country that’s home to 45 million citizens … and we honor those who fight for freedom,” state Senator (D-32)/North Bergen Mayor Nick Sacco said as he read the proclamation.

“We support those who were forced from their homes, we stand and pray with President Zelenskyy for a free and independent Ukraine.”

The resolution was approved unanimously (5-0) with no further discussion.

They did so in consultation with Jersey City Board of Education Vice President Natalia Ioffe, who is of Ukrainian descent and recently just helped evacuate her 84-year-old grandmother from the war-torn country.

“This City Council urges the New Jersey representatives in federal government to engage in advocacy for the U.S. to provide immediate additional defensive support to Ukraine, in order to prevent further mass casualties among the civilian population, prevent ecological catastrophes and alleviate what is becoming the largest refugee crisis in recent history,” the resolution says.

“Be it further resolved, that this city council urges the NJ state government to provide the Ukrainians fleeing the conflict a safe refuge in New Jersey, by providing Temporary Protected Status, as well as programs and support necessary.”

Ioffe addressed the council about two hours into their meeting and thanked them for their support.

“I would say that probably most of your residents and Jersey City residents of Ukrainian origin have been directly impacted by the current war and have either family members who are in Ukraine and cannot leave or have been fortunate enough to escape to be evacuated by very brave people as my grandmother has recently,” she said.

“It is a dreadful thing that is going on. In the context of us in the United States, and our responsibilities as citizens, there’s a power that we have, whatever position we may be … we have the power to have a voice to lobby for very important things,” she said, noting that lobbying federal representatives is crucial during times like these.

The resolution was sent to U.S. Senators Bob Menendez and Cory Booker (both D-NJ), as well as U.S. Rep. Albio Sires (D-8).

State Senator Brian Stack, also the mayor of Union City, along with his colleagues in the 33rd Legislative District, Assemblyman Raj Mukherji and Annette Chaparro, were also forwarded a copy.