No injuries were reported after a Hoboken warehouse blaze last night at the same location where two people died in a December fire. 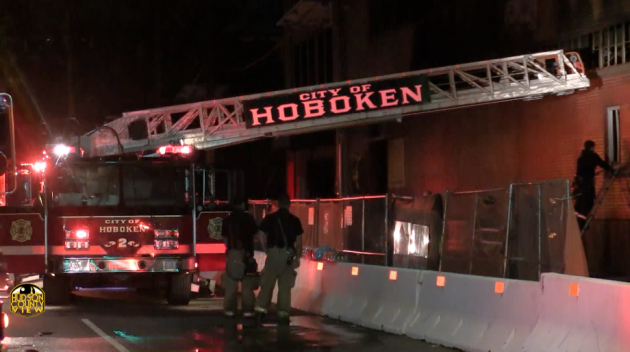 The Hoboken Fire Department, along with Hoboken police, EMS, and office of emergency management, responded to 38 Jackson St. – the Chambord building complex, last night at about 9:52 p.m., according to Fire Marshal Stephen DiVincent.

The two-alarm fire was extinguished at about 10:30 p.m. under the command of Battalion Chief Joseph Grossi.

The cause of the fire remains under investigation, though the Hudson Reporter wrote that the fire may have been caused by “ignitable material from a former tobacco tenant.”

The city issued a Nixle alert at 10:14 p.m. indicating that Jackson Street between Newark and First Street was closed to vehicular traffic and that no injuries were reported.

The building is set to be torn down after a three-alarm fatal blaze in December, which claimed the lives of Alexander von Schlinke, 61, and Rose Maria Vos, 60.

The Hoboken Relief Fund was reestablished to benefit the businesses impacted by the fire.

Union City Small Business Grant Program offers up to $5,000 per...

Hoboken to close multiple roads along Jefferson Street this weekend to...