“Detective Mark Francin is a dedicated police officer who puts his life on the line every day to keep his community safe and we would ask that he not have his name attached to dubious allegations that lack credibility such as these,” Colligan said in a statement.

“The allegations being made against Detective Francin are not supported by public record and the fact that his reputation is being questioned in the face of all available evidence because of the word of anonymous sources is a truly sad state of affairs.â€

One of the sources cited by NBC appeared on camera, but maintained anonymity by wearing a hood and having their voice altered.

This source alleged that it was not unusual for employees who work in North Bergen and live elsewhere to still vote in the township.

â€œAs members of the law enforcement community, we will always stand together against unnamed attackers to defend our members’ reputations,â€ Colligan added.

The I-Team, which has reported on about a dozen stories detailing instances of alleged corruption in North Bergen dating back to last year,Â aired a story on September 20thÂ that focused on three public employees who work and vote in the township but live outside of North Bergen.

One of whom is Police Det. Marc Francin, who has been with the department since 2001.

According to the report, Francin is registered to vote out of a Bergenwood Avenue complex that his parents owned until 2010 and he voted out of that address 14 times.

The I-Team also identified a home in Saddle Brook owned by Francin and neighbors in both municipalities said they were under the impression he lived at each address.

However, the controversy mostly involves a follow-up report that aired on September 30th, since Francin was mentioned again, but it was not stated outright that he had not voted since 2014.

â€œTo accuse this fine officer of criminal behavior in relation to a voter fraud scheme when he hasn’t voted at all in five years is ridiculous,” added North Bergen PBA President James Vangelakos.

“There is absolutely no basis for associating Mark with crimes like insurance or tax fraud. We call on NBC news to apologize and stop smearing a good police officer who is just doing his job.” 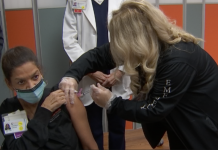