In a letter to the editor, former Jersey City Police Chief Robert Cowan says that Capt. Joseph Ascolese and Lt. Kelly Chesler, recently acquitted in a case about no-show jobs, says they were the “most competent” commanders under his watch.Â

This dismissal comes in the wake of an acquittal of all charges against Co-Defendant Police Officer Michael Oâ€™Neill after a Motion by the Officers Attorney.

Captain Ascolese and Lieutenant Chesler were by far the most competent, honest and conscientious police commanders inside the Jersey City Police Department during my time as the Chief of Patrol and subsequent tenure as Chief of Police; quite frankly they were my go to commanders for complex assignments.

As the Chief of Patrol in July of 2013, I assigned Captain Ascolese and Lieutenant Chesler to command the motorcycle unit which was a predominantly white all male unit in where sexism, elitism, poor management and the good old boys club had festered since at least 2005.

Upon Ascolese and Chesler taking command of the Motorcycle Unit almost every officer down to the man including their supervisors had previously been disciplined for violation of Jersey Cityâ€™s Sexual Harassment Policy.

The officers who had been disciplined had thought it okay to have pornographic films, reading materials and alcohol in their all boys lounge, a lounge which doubled as a police locker room in a Jersey City Police Facility.

1. Turn the Motorcycle Unit into an efficient and properly functioning police unit capable of reducing crime in Jersey City.

2. Increase the size and diversity of the Motorcycle Unit taking political considerations out of the resume that had historically been a necessity for inclusion into the unit.

3. Change the attitude of â€œmostâ€ of the â€œold guardâ€ who believed the Motorcycle Unit is a mens cigar club. Build a Motorcycle Unit that will be expected to actually perform real police work, police work performed out in the streets of Jersey City for the benefit of taxpayers; police work beyond the writing of ten tickets a day.

Ascolese and Chesler performed the duties I had assigned them flawlessly, however, this created dissension and obstruction with the â€œold guardâ€ who were connected to the police unions.

Ascolese and Chesler became the focus of attacks from disgruntled â€œold guardâ€ members of the motorcycle unit.

Certain malcontents subsequently engineered a criminal frame up of Ascolese and Chesler, a frame-up which was well received by the upwardly mobile prosecutor.

Ascolese and Chesler filed lawsuits alleging much of the above as well as having had been the target of other adverse job actions.

Ascolese and Chesler then fell victim to Fulopâ€™s Gubernatorial Ambitions and his thirst for police union support.

Fulop sought to portray an undeserved â€œtough guy imageâ€ in where people would fear him, and those who would file suit against him would be retaliated against with his full political power.

1. Steve Fulop wanted to be governor, and

3. Hudson County Assistant Prosecutor Pete Stoma wanted to be a Judge (or some other unknown appointment)

Fulop, Suarez and Stoma failed dismally in their plans, however, the Jersey City Police Investigator who was either incompetent or corrupt has been promoted twice by Jersey City Mayor Steve Fulop.

In closing, the trial testimony was replete with testimony regarding the lack of policies related to off-duty work.

Public Safety Director Jim Shea was responsible to create this policy as part of duties inherent in his office as well as the revised off-duty ordinance created in 2013 which placed the entire program under his control.

I proposed numerous ideas for Shea for inclusion in an off duty policy and he did nothing. I awaited to receive policy directives from Sheaâ€™s Office so I could implement it through general order, all I received was silence; when will Shea be held accountable?

If anyone has information on corruption inside Jersey City or Hudson County, please forward all information to:

I recommend any material be sent anonymously which would make me unable to testify as to origin. 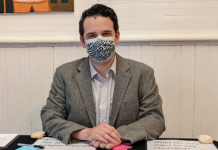 LETTER: While Jersey City IZO is a step in the right direction, there’s a lot of work to be done