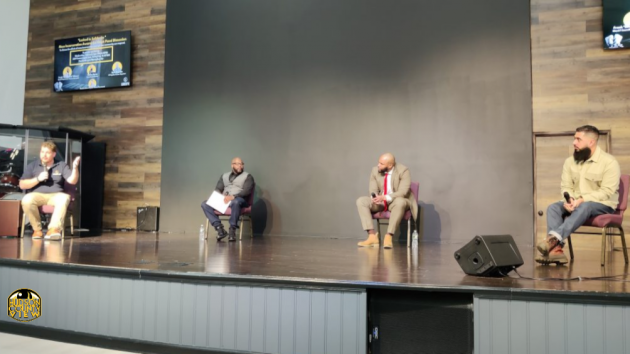 The panel was moderated by Pastor David Carment and also streamed live on their Facebook page. The panel was part of a week-long awareness program hosted by Jersey City Together.

It was noted that 25 percent of prisoners in the world are being held in the United States, which only has five percent of the population. In addition, one in three black men will get arrested, as well as one in six Hispanic men, while only one in 17 white men will be arrested.

Gilmore, who did time in prison as a young man, said those who are from poorer families being raised by a single parent significantly raises the probability they will be arrested.

“It’s almost a guarantee of encountering the mass incarceration system,” Gilmore said of children being raised by a single parent in poorer households.

He also noted many cannot afford bail and thus have to stay in prison until their trial.

Navas explained he has worked halfway houses and along with the county jails where certain therapy is provided.

He noted the recidivism rate is very high, with many felons returning to jail, recounting people saying “I went back home. That’s what happened.”

“What seems to be a joy for some is a misery for others,” Navas added.

Franklin said there is no program to treat trauma the way addiction is treated.

“I had to desensitize myself just to go to school,” he said, noting he passed areas he knew murders were committed.

Franklin also mentioned felons have trouble securing housing and social services due to the law, including himself.

“No one will rent to me. I don’t have access to take my children to a safer space. I can’t put my children in better schools.”

Franklin noted that issues with mass incarceration are generational.

“My son died in prison in a fist fight in a cell. And now I have a grandson without a father. My father was a heroin addict. Three generations were destroyed,” he revealed.

“Some of my brothers and sisters won’t be saved but still we need to figure out how to salvage the third generation.”

Gilmore noted most in prison have trouble reading, which prevents them from securing better jobs.

“I credit education with my rehabilitation. Education will afford you the opportunity to combat almost anything.”

Gilmore continued that it costs more money to imprison people than to attend the top university in the state. He added that while some are imprisoned for petty crimes, the nature of being in prison makes them worse criminals.

“If you put a kid in a gym and put a basketball in his hand and don’t teach him, in five years he’s going to learn how to play basketball. By default, they’re going to participate in that arena.”

He argued teachers are more influential than parents in some cases where children don’t see their parents much since they often have to work in the evenings to make ends meet.

“Someone believed in me. And because of that teacher, I started valuing education more,” Gilmore explained.

He said black and white people commit crimes just as often as each other, but the difference is white people can pay for lawyers and mental health evaluations.

“I’ve seen so much violence in my life that if I hear the gunshots I don’t run, I look to see where the gunshot came from,” the councilman stated.

By 16 years old, many in urban neighborhoods have already have lost more than one relative due to gun violence, said Gilmore.

“These kids are traumatized,” adding that those seeking assistance for mental health issues is rare since it has a stigma in their community.

Navas noted he is a school counselor in the Heights, recalling an incident where a 4th grade girl came to his office due to an anxiety attack.

He continued that the good work that can be done to help children in school before it’s too late. Navas said many children internalize rage and issues they deal with.

Navas said many are coping with an absentee father or a neighborhood filled with drug dealers and therefore need to talk through the issues.

Additionally, Franklin criticized increased funding for police and said the money would be better spent building infrastructure and giving people jobs. He argued children often have PTSD, though some interpret their actions as behavioral problems.

JC Youth Foundation raises over $10,500 for city couple killed in...