Jersey City Together hosted a well attended virtual meeting last night where members called for a fully funded budget for their public schools. 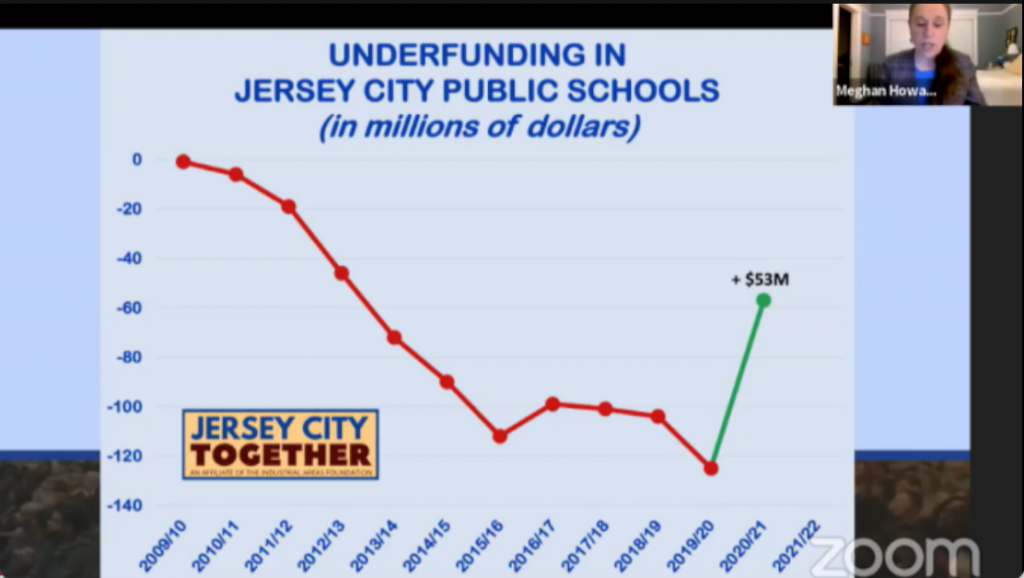 Pastor Jonathan Oliveira, of the Hub Church on Storms Avenue, said they need to “focus on a fully funded budget for Jersey City schools for the first time in a decade.”

Despite those increased, the district still remains woefully underfunded, D’Souza said, stating that the shortfall comes out to about $57 million a year.

“My daughter has an IEP (Individualized Educational Plan for special needs). I had to fight tooth and nail to get her evaluated in kindergarten. She has never been re-evaluated,” Pilar Lewandowski said, noting her daughter is now in the 4th grade.

Since the school would not do it, she had to pay to get her daughter evaluated at a private facility.

“Our whole school system was hanging by a thread pre-COVID. The inequities were stark as well … Without a fully-funded budget, our kids won’t be able to overcome their adversities,” exclaimed Danelle Walker.

Walker also said there is not enough support staff to help special needs students, noting that new paraprofessionals are “per diem employees acting as support staff don’t have benefits and make below the cost of living wages” and therefore don’t have the proper training.

Genis Espinal, a student, complained about having too many substitute teachers instead of actual teachers able to explain individual subjects properly and prepare her for exams.

“All we did was sit in class doing nothing but stare at the screen all period until it was time to leave for most of the time,” she said.

After hearing some community feedback, Meghan Howard-Noveck went over some of the data related to school funding over the past decade or so.

“This is not a new problem. Nor will it be an easy one to address … Our children have been told again and again by different authorities; the state, the city, the Board of Education that we can’t afford the quality education they deserve and are constitutionally guaranteed,” she said.

“The finger-pointing is Standard Operating Procedure. There is a long history of underfunding and plenty of blame to go around … For at least 50 years, Jersey City schools have not been sustainably funded.”

Howard-Noveck continued that only 27 percent of local property tax goes to the schools, yet, the state average is 52 percent. She also said that Jersey City taxes that fund the schools are lower than 90 percent of the municipalities in New Jersey.

Eventually, Superintendent of Schools Franklin Walker was asked if he would support a fully funded budget.

“Yes, I am …. committed to educating students for greatness,” he replied, adding that school district was last fully funded in 2008.

Furthermore, Board of Education President Mussab Ali said he is working with the city and state legislators to address the situation along with his colleagues and also committed to fully funding this year’s budget.

“The problem is the state is progressively cutting state aid as Jersey City has prospered and no longer qualifies for the millions it previously received,” the board president began.

Ali explained that they were expecting an $81 million cut last year when aid was only cut $71 million.

“Next year, it’s $100 million, then $70 million. We just can’t play that game. As we reduce funding, we can have a set amount of funding that can be reduced from the district and have a longer off-ramp,” he argued.

He continued that they will need to increase the local tax levy.

“That’s the most important thing when it comes to sustainable funding. Also, the school district needs to claim more money it is owed by Jersey City in tax abatements from developers … I think that dollar amount comes to about $50 million the city owes us.”

Ali also wants the board of education to issue new bonds in order to help build new schools.

“The SDA [School Development Authority] has neglected its responsibility to build new schools, so we need to engage in that. We have really been failing our kids.”

Hoboken Councilwoman Jabbour: ‘I am proudly voting YES for the high...