After 13 hours of negotiating on Sunday, the Jersey City Board of Education and the local teachers’ union have reached a new deal, ending the first strike in the school district in 20 years after just one school day.Â 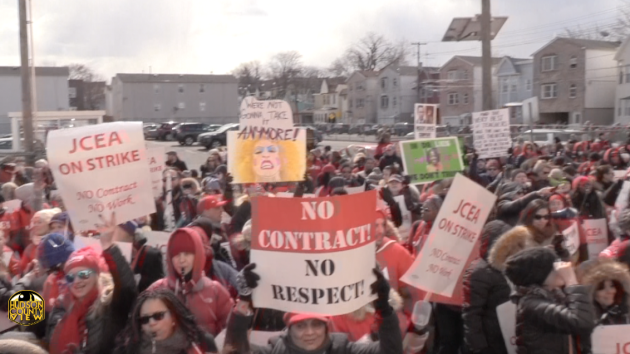 “After 13 1/2 hours The Jersey City Education Association and the Jersey City Board of Education have reached a tentative agreement in the negotiations in which the JCEA was seeking a package that included quality, affordable health care and economic security,” JCEA President Ron Greco wrote in a private Facebook post forwarded to Hudson County View.

“The JCEA looks forward to a resolution of the three other affiliates shortly; ParaProfessionals, Secretaries and the NCASA.”

In a statement, Jersey City BOE President confirmed the news, crediting everyone involved, including his fellow board trustees and Mayor Steven Fulop.

“A marathon 13 hour negotiation session that began around 08:30 a.m. on Sunday, March, 18 concluded with the signing of an MOA covering salary, insurance and other terms at around 9:30 p.m.,” said Thomas.

“Mayor Fulop took the lead in in bringing the JCBOE and the JCEA back to the table and literally keeping the two parties together at the negotiating table until a deal was reached late tonight. I am very proud of the Board Trustees who took time away from work and family over the last 9 weeks to reach this historic milestone. The agreement is subject to ratification by the full Board of JCBOE and the JCEA membership.”

As a result, Jersey City Public Schools will be open on a regular schedule tomorrow, including morning and after school programs.

In a tweet around 7 p.m., Fulop said that negotiations had gone “straight through” since 8 a.m. this morning and felt the two sides “are making real progress.”

After Greco gave the BOE a stern warning that they would strike if they couldn’t work out a deal at Thursday’s meeting, the 4,000 member union made good on their word Â on Friday.

While protests occurred throughout the city, the day was punctuated by thousands of teachers converging on the local board of education headquarters at 11 a.m.