Jersey City police arrested a gunman who was walking into their Greenville precinct late last night exclaiming that he was seeking “street cred,” with no injuries reported as a result of the incident.

“Last night as 16 of our officers were preparing to hit the streets for the night shift, an armed man entered the South District Police building stating he was looking to earn ‘street cred,'” the Jersey City Police Officers Benevolent Association posted on their Facebook page at 12:57 p.m. today.

“Thankfully the officers were able to subdue him quickly and no one was injured, or worse. This episode served as another scary reminder of the dangers the men and women of the JCPD face every day. Great work by all… stay safe.”

Law enforcement sources with knowledge of the situation, who spoke under the condition of anonymity, credited Police Sgt. Tarance Bryant for recognizing the imminent danger as the suspect was entering the building and officers immediately rushed outside to help subdue him.

The same sources also pointed out that no one was injured during the arrest.

City spokeswoman Kimberly Wallace-Scalcione said that the incident occurred at approximately 11:09 p.m. last night, where Kevin Cherry, 40, was attempting to enter the Greenville Precinct with a gun concealed behind his back.

She added that a sergeant was able to safely stop and disarm Cherry before he entered the building.

“The officerâ€™s quick thinking and effective tactics saved this from a potentially much more serious situation. The officers placed their own lives at risk to effect the arrest without any harm to the armed suspect,” Public Safety Director James Shea said in a statement.

“This is yet another example of the excellent work our officers do on a regular basis while protecting the City.â€ 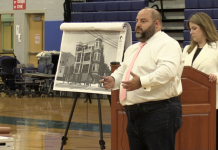