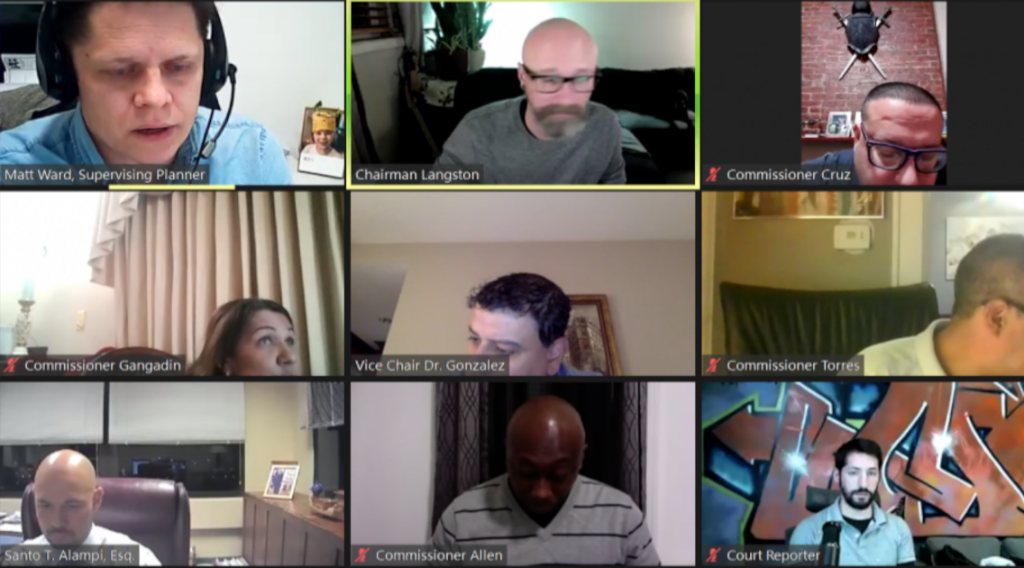 The IZO cleared the Jersey City Council on first reading Monday night and necessitated approval from the planning board before the council could hear the measure on second reading.

Jersey City Supervising Planner Matt Ward said the IZO is consistent with the city’s Master Plan and recommended its adoption. He also said they want to increase the diversification of income in many neighborhoods through the ordinance.

“Equity is paramount,” he stated.

Ward reiterated that the new ordinance has no buyout provisions to surpass or reduce affordable housing in new developments.

As a result of variances, developers will be required to create minimum affordable housing in new buildings that mostly varies between 10 and 15 percent, though state funded projects would require 20 percent.

“The only way this gets triggered is if there’s a variance triggered?,” Planning Board Chair Christopher Langston asked.

He was interested in understanding what type of plans would prove an exception to the rule.

Ward explained that developers seeking to create five or more units or more than 5,000 square feet of floor area, including hallways through a variance, trigger the affordable housing mandate in the IZO.

“In the case where this is triggered and five or more units are granted, is an applicant able to come back to the board later?” Langston asked.

They often come back with fewer affordable housing units, he noted.

“If they absolve themselves of the trigger, of having this chapter apply to them, we wouldn’t be able to apply it,” Ward said.

“Let’s say that scenario happens. They come back to us with one less unit. Can we consider that in any decision moving forward?,” Langston asked.

“Under applicability and exemptions, nothing in here precludes Jersey City from requiring it to have more affordable housing,” Ward said.

In that scenario, he noted that they could impose a higher percentage of affordable housing than the ordinance prescribed.

“This provision C is going to be a little tricky in some aspects. Outside of the redevelopment realm, these are going to be density variances in front of the zoning board for the most part,” Planning Board Counsel Santo Alampi said, noting exceptions to the rule.

Ward noted that height and unit variance requests would trigger the IZO for projects before the planning board.

“The trigger is the variance as a result of a variance or a rezoning,” Alampi said.

“What is that board’s legal exposure? I would consider that (the IZO) a public benefit,” Langston continued.

He was concerned a developer could seek the removal of an IZO trigger, be denied the ability to do so, and then sue the planning board.

“That’s the kind of stuff lawsuits are made of chairman,” Alampi said.

Langston said he wanted to ensure affordable housing units are constructed with the same quality that goes into other units.

Ward said Affordable Housing Division Director Gigi Gazon included that within the ordinance and plans to enforce it.

He noted the IZO is predicated on developers asking for variances.

“If the set aside is set too high, no affordable housing units will be built,” Ward stated.

Ward explained if the requirement is set too low, it will be considered “the developers are running away with the store.”

“That was a good answer,” Allen responded.

“It seems like the need in the wards with less income, the need is not for affordable. The need is for low income,” Commissioner Joey Torres added.

Ward said the housing code defines standards for low-income housing, which are included in some trigger provisions – depending on where a building is located.

“We are creating opportunities to house very low-income individuals and families,” he said.

“Is there a timeframe for these types of things?” Torres asked, expressing concern that an affordable housing requirement would be lost with a change in ownership.

Ward explained requirements follow the property deed and that the UHAC specifies that affordable housing standards should last 30 years.

The Fair Share Housing Center worked with the Planning Department to craft the ordinance.

“You’re really looking out for the community,” Torres said.

“Thank you to the planning department for this IZO,” Planning Board member Vidya Gangadin said, noting the need for more affordability. Allen thanked Ward as well.

While the updated Master Plan was on the agenda, it was moved to next week’s meeting.