The Jersey City Planning Board rejected the Exchange Place Redevelopment Plan after hearing from many supporters of the Katyn Memorial speak against it. 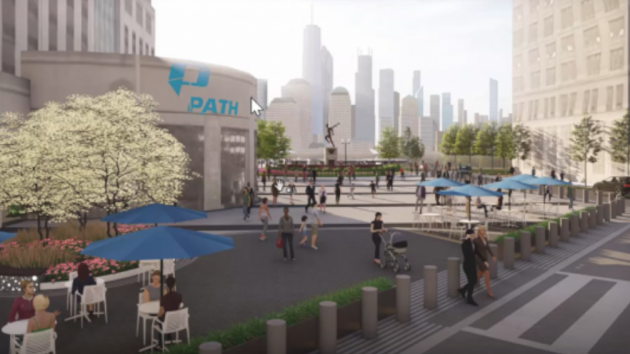 Jersey City Planning Board Chair Christopher Langston noted their vote on the plan was non-binding, while Commissioner Joyce Watterman, also the council president who sits on the Exchange Place Alliance board, recused herself.

Board attorney Santo Alampi noted it is a Section 31 review whereby the review is limited in scope.

“We are proposing a pedestrian plaza. Three years ago, when we began this process… the area surrounding the Katyn monument was essentially a parking lot,” said attorney Donald Pepe for the Exchange Place Alliance. He also sits on their board.

He said the area could be used for festivals permanently and would enhance the aesthetics.

Pepe said they engaged with the neighboring businesses, the city, and the general public to develop a final design, as well as that public input was heard at five Exchange Place meetings.

“The plans have been up on our website for the better part of a year and a half,” Pepe said.

Landscape Architect Tom Carman described the plan, which includes more greenery by the monument and making it inaccessible to traffic.

“The statue itself is situated in the exact same location it is today,” he said.

“It’s great to see you trying to control the traffic. Are there going to be any timelines for the office’s buildings … to have deliveries?,” Commissioner Joey Torres asked.

“To some degree, deliveries will still be achievable through the 18-foot wide pathway we provided that will be by the Starbucks. That won’t be restricted. It’s been designated as a pedestrian plaza by the city council. All those buildings have alternative means to get access,” Pepe said.

“There is not specific parking for the plaza itself. Vehicle parking is no longer permitted in this space. However, there is parking at the adjacent buildings,” Carman said.

“There’s still going to be drop-off potential at the end of Christopher Columbus and on York Street that would be accessible. However, we’re not encouraging parking here?,” Desai continued.

“Most of the original design was a lawn area most recently altered at the request of the city council and city engineering. And even that plan, strangely enough, did not meet the green area ratio requirements,” Pepe said.

“We did need to have structurally to be able to support the emergency vehicles. It’s to encourage these flood prevention measures on sites,” Engineer Gabrielle Gornelli said.

Pepe was also asked if the area would still be able to accommodate the same sort of large festivals and events it has in the past.

“That was a very significant concern. The project has been designed to accommodate a full-sized stage which has been used with respect to the 4th of July celebrations,” Pepe said.

In one scenario, Carman said a 14- by 30-foot stage could also be accommodated with 22 to 40 festival tents, with Pepe adding two to three stages could be accommodated in the area for a festival.

“I’m opposed to the seven-foot-high obstruction around Katyn monument, this so-called wall. This obstruction is not only an insult to the people who in 2018, including myself and my husband, who for a whole nine months fought to sustain in this place. And I believe creating a so-called wall would not allow us to have celebrations,” Margaret McGrath said.

“We want to ensure the work is done in phases since this is our front entrance. We need more like six or seven so we wanted slanted parking,” added Hyatt Hotel representative Richard Branca.

Pepe said they were committed to maintaining access to the Hyatt Hotel during construction, though admitted patrons would have to be rerouted for a short period of time.

“We have competing desires here actually that came from city engineering. We’ve given the Hyatt its own designated drop-off area. We believe the pedestrians take precedence,” Pepe explained.

“I agree with you. The Master Plan spells that out,” Langston noted.

Several advocates for the Polish community said the proposal would downplay the significance of the Katyn Memorial.

“Today is 82nd anniversary of that terrible genocide. I’m concerned about the size of the place to celebrate. This is too much of an obstacle to show the monument the proper way,” said Gosia Porwit.

“It would obscure the Katyn Monument from sight to the greatest extent possible and make gatherings and ceremonies as difficult as possible. The oval space around the monument is way too small,” said Polish American community advocate Andrzej Burghardt.

He also called the design “an intentional mockery” of the statue.

Furthermore, Marek Skulimoski also said he did not like the number of benches proposed and that the monument was relevant given the Russian invasion of Ukraine.

Krystyna Piorkowska criticized the way the public meetings by the alliance was held, as did Jeanne Daly.

“You were never able to A, make a comment … or you had two minutes to make a statement that was never replied to. This was never brought to the community. It is an embarrassment. There has been no input whatsoever,” she stated.

“We need to preserve our public plaza, not for these corporate interests. This was supposed to go out for public bidding, and it wasn’t. It was awarded to Mr. [Mike] DeMarco’s friends he hired while he was at Mack Cali,” she added.

Committee for the Preservation of Katyn Monument Treasurer Suzanne Mazurczyk agreed with prior speakers that the benches and trees proposed would obscure the view.

“How many times did you meet with them?,” Planning Board Vice Chair Dr. Orlando Gonzalez asked.

“We discussed plans for the park at no less than five of our exchange place meetings which are open public meetings,” Pepe said.

“The alliance could consider adding a break in the planter and seat wall to allow more open through way access. Other than that, I would say it is consistent with the goals of the Master Plan,” Clark-Sokolov noted.

Langston said that he agreed with giving the pedestrian plaza a face lift, but didn’t particularly like the current plan.

“I do agree with the area of rehabbing the pedestrian plaza. I don’t know why he needs to put five-foot tall benches … around the statue. It means a lot to a lot of people. I don’t see that I can support the current design,” he asserted.

“The statue signifies what Jersey City is all about. Those benches are not needed there,” Commissioner Vidya Gangadin said.

Commissioner Peter Horton agreed that the statue should not be blocked or impeded in any way, while Torres said he was disappointed to hear from members of the public that their voices were not heard.

The plan was rejected 6-0(1), with Watterman recusing herself.