The Jersey City Planning Board approved amendments to the Tidewater Basin Redevelopment Plan, adding 15 percent affordable housing, to the dismay of some residents. 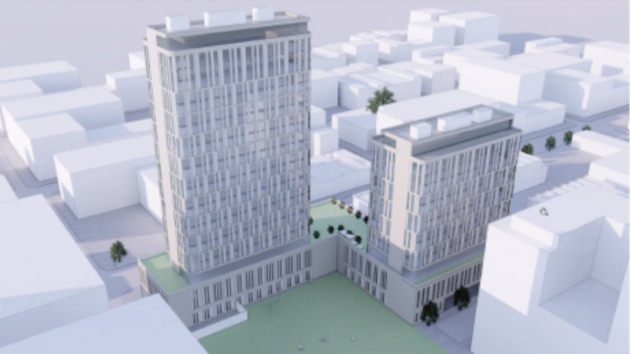 Supervising Planner Matt Ward explained the Jersey City Council authorized them to amend the Tidewater Basin Redevelopment Plan via a resolution they approved at the end of May.

Attorney James Burke represented the owner of the site, Sussex Associates LL. Their proposed development would be located at 177 Grand St. on a currently vacant lot.

“The owner proposes to meet the 15 percent set-aside of affordable housing in this project, which equates to 60 units of housing in the downtown location,” he said.

“This is an amendment to a redevelopment plan petition. The question really posed before this body is whether the amendments proposed to the redevelopment plan are consistent with the Master Plan. This is not a site plan application,” Board Attorney Santo Alampi said.

He noted the specific design is liable to change.

“No approval to construct anything will be granted this evening,” Alampi added.

“This is a focus on compatibility with the Master Plan. The purpose of this redevelopment plan is to create the opportunity to build and construct affordable housing in the downtown section of Jersey City,” Burke replied.

He continued that 45 percent of city renters are paying more than 30 percent of their income on housing.

“The very poor population in Jersey City had grown by 10 percent between 2010 and 2016. Rent costs were felt disproportionately downtown and in the Journal Square area,” Burke added, noting their plan is consistent with the Inclusionary Zoning Ordinance (IZO).

Alampi responded that he was concerned Lot 10 may not be in the plan, to which Kolling said it is split between districts and is included in the boundary of the basin. Ward called it “a split-zoned condition.”

“If it is an issue, how would we remedy it?,” Burke asked.

Burke said they sough to “proceed full speed ahead” since this issue would not be significant in their final proposal. The meeting was paused briefly so the parties could further review the unexpected matter.

“We can move forward with the redevelopment changes,” Board Chair Christopher Langston said after hearing input from Ward and Alampi.

“The lot is vacant it has been vacant for a long time,” Architect John Zimmer said after presenting renderings.

“These amendments are consistent with the Master Plan,” Ward said, noting it fits their goal of creating a walkable neighborhood as well as several others.

During public comment, most speakers came out against the project.

“I just wanted to express my support for the project. I’m strongly in favor of more housing in downtown Jersey City … so that it can be more affordable,” Robert Kirby said.

“I also want to support this project and its ability to deliver proposed affordable housing units. [But] both projects would in fact … be putting in development that far exceeds the four stories that share a property line with these projects,” Daniel Spadaro said.

His wife, Paige Keck, also appreciated the affordable housing component, but did not like the proposal overall

“I think we have right to understand why this includes 340 luxury units. 340 more entitled people in addition to 60 is not what I moved into this neighborhood for. So, I would like to understand the economics behind it. This is gobbling up any kind of green space we had access to,” she said.

Thomas Hilmer said he worked on this redevelopment plan back in 1999 called the project “aggressive” and felt that it didn’t suit the neighborhood, as did Stephanie Daniels.

Diane Kaese, of the Historic Paulus Hook Association, also did not like the plan and said the schools are already very overcrowded and the intersection of Marin and Grand is dangerous enough as it is.

“It’s flat-out crazy … We asked to have a conversation about the plan but instead we have plans presented by a developer.”

Ward said that most of the site is in an area that allows for 58 stories to be built.

“A city is a dynamic place. It is consistent with the Master Plan,” he said, as well as that sunlight would still be able to get through.

“It does meet a number of our Master Plan goals,” Langston said.

Ultimately, the board approved the amendments unanimously (5-0).