The Jersey City Planning Board unanimously approved amendments to a plan for a 33-story mixed-use skyscraper and parking garage on the waterfront. 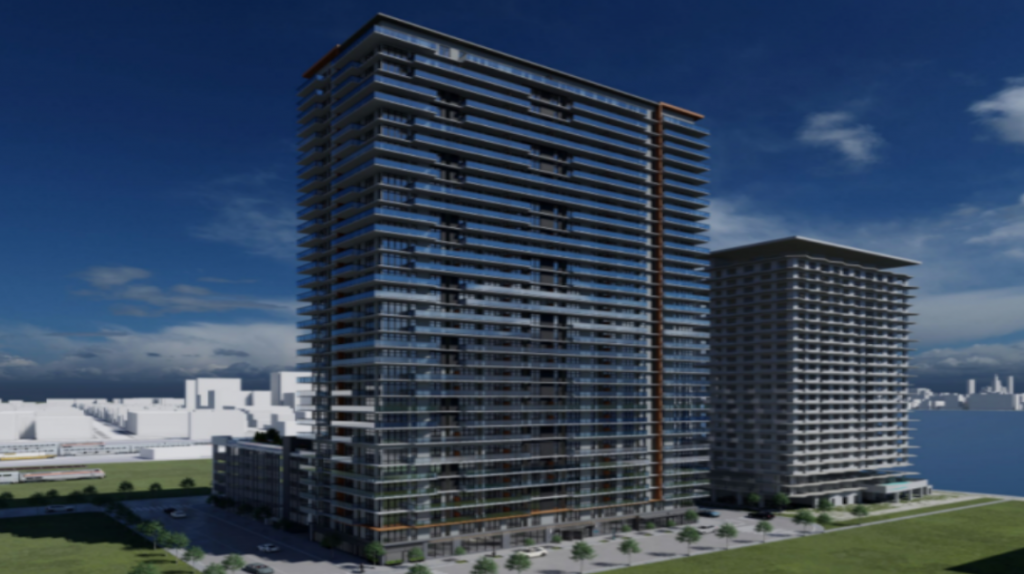 At the corner of Park Lane North and Washington Boulevard, the applicant Wave 2 LLC, seeks to construct an approximately 50,000 square foot, 33-story, mixed-use tower with 387 units, almost 8,000 square feet of retail, as well as a parking garage.

The plan was adjusted to comply with the recommendations of the New Jersey Department of Environmental Protection’s review.

Planning Board attorney Santo Alampi noted the board initially approved the project at its January 19, 2021 meeting.

“It appears that there was a trip up at DEP where they didn’t go along with what this body did,” he said.

Ronald Shaljian, the attorney for the applicant, explained that the number of units in the building was reduced from 391 to 387 and the number of parking spots was increased from 363 to 387 spots in the garage, which is a separate building from the tower.

In addition, the garage ramp was redesigned to accommodate more parking and the garage’s height was reduced from six to five levels.

Shaljian also explained that some minor civil engineering changes were also made, the most significant being that the gas meter room being relocated to the northwest corner based on the location of the gas main in the street.

The units lining the garage were also reduced by one level: from six to five.

The outdoor amenity space planned is supposed to consist of a central open green space, framed with trees, fitness spaces, yoga space, a dog run, a series of lounging spaces, and outdoor dining features for residents of the building.

The building will have a mix of some studios, one to four-bedroom apartments. It will also have recreational courts with a dog run, a landscaped lawn area with trees and ornamental shrubs/flowers, fitness areas, grilling, lounging chairs, and a yoga lawn.

Planning Board Secretary Cameron Black asked if the amendments comply with the conditions of the DEP.

“My client will comply with those provisions,” Shaljian said.

The project also proposes approximately 13,415 square feet of improved space consisting of sidewalks and trees along the perimeter of the building and 40 on-street parking spaces.

The proposed project will be bounded to the north by 18th Street, to the east by River Drive, to the south by Park Lane North, and to the west by North Boulevard.

The applicant’s site is a part of the Residential zone of the Newport Redevelopment plan and did not require a variance from city standards. Thus it also did not trigger the conditions to necessitate affordable housing.

The proposed project, which sailed through 7-0, also conforms with the Jersey City Master Plan and the Newport Redevelopment Plan goals.