Jersey City held a ceremony for 20th anniversary of the terrorist attacks on September 11th across from World Trade Center site, with the event featuring remarks from victims’ friends and family. 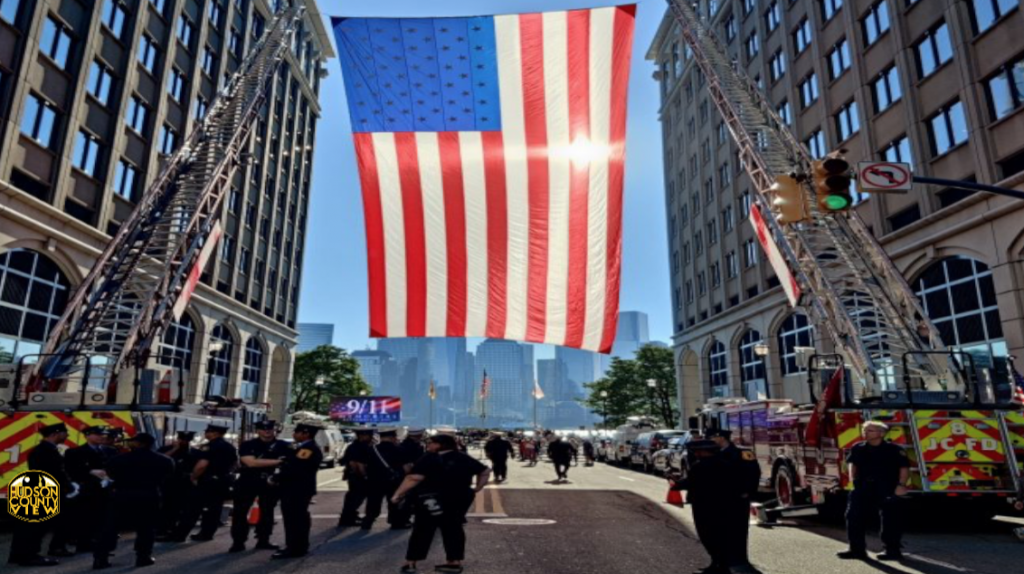 The event was held at the 9/11 memorial at the Hudson River Waterfront Walkway, which includes a tombstone with names of those lost and a mangled steel beam from the towers found in the aftermath is also on display.

Mayor Steven Fulop led remarks during the ceremony flanked by Jersey City firefighters and police officers. Moments of silence were held at 8:46 and 9:02 a.m., which were the respective times when the two planes hijacked by terrorists affiliated with Al Qaeda crashed into the Twin Towers.

“The silence was numbing. The smoke was filling the sky, and this area right here became a loading site. All the ferries were going back and forth all day long,” said Carol Lester, who sang a song she wrote regarding 9/11.

“I would have preferred to never have had to write that song,” she added.

Venka Chalasani spoke on behalf of his sister Swarna Chalasani, who perished that day. She was remembered as an active volunteer in her community and gave charity generously.

“Swarna made us understand the fundamental meaning and purpose of human life. She demonstrated that every and each human being stands for the inalienable human rights of dignity, freedom, and liberty,” he said.

Barbara Smith spoke on behalf of her friend Barbara Etzold, a fellow resident of the Port Liberte neighborhood.

“Her office was on the 93rd floor of the north tower, truly the ground zero of ground zero. My hope was that there was no time for fear or pain,” she said.

Rivera then read a statement from the family of Mary Ellen Tiesi.

“For it is in remembering the painful circumstances of September 11, 2001, that we fortify our will and resolve to guard against a future act of terror,” he said.

That was followed by Watterman reading a statement from the family of Siucheng Steve Wong.

“It was a horrible, horrible event. To our beloved Siucheng Wong, 20 years ago you left home for work like usual with a smile on your face and a kiss goodbye. Never did we that you would be taken away from us so suddenly on 9/11. It broke our hearts, and it was the worst day of our lives. 20 years have passed, and our daughter has become an intelligent, strong, and kind young lady,” she said.

Rev. Dr. Joshua Rodriguez of City Line Church read the benediction, reflecting on the chaos that occurred that day.

The full ceremony streamed live on our Facebook page and can be viewed below: