“Marcos has provided Jersey City with exceptional leadership during the past few years, both as Deputy Mayor and as Director of HEDC,” Mayor Steven Fulop said in a statement.

“He has truly contributed to the growth and success of our City with his commitment to affordability, sustainability, and inclusive development, and we wish him well as he starts a new chapter.”

Vigil, who oversaw economic development and real estate as deputy mayor, took over the HEDC in January, a change Hudson County View foresaw coming about a month prior.

“It has been the greatest honor to work with Mayor Fulop and to have been entrusted to spearhead his vision for sustainable, affordable, and equitable development away from the waterfront over the last few years,” Vigil said in the same statement.

“I’m glad to have played a small part in setting the stage for the next generation of City leaders who will make this the best mid-size city in the country.”

He will work his last day for the city on August 10th and Cialone will be ready to step in the next day, August 11th.

“I am honored that the Mayor has asked me to continue the work we have been doing, but now on a larger scale,” added Cialone.

“Based on the time I have spent with the staff of HEDC I know that they are committed public-servants and I will be off to a great start with their support. We will continue to work toward providing the highest level of service to the residents of Jersey City.”

This is the third major personnel change the Fulop administration has announced this summer: bringing on Jake Hudnut as chief municipal prosecutor on July 2nd and hiring Dinah Hendon as the director of the housing preservation division – effective July 23rd. 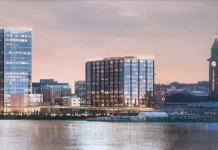