After over 6 hours-worth of public comment from Jersey City residents, the Jersey City Council voted 6-3 to approve the West Bergen-East Lincoln Park Historic District – the first of it’s kind in 35 years.

The room remained divided and closely mimicked the fan rivalry between the Boston Red Sox and New York Yankees with signs, posters, applauses and heckling, but it didn’t stop the speakers from voicing their concerns.

Former Jersey City Deputy Mayor Kabili Tayari brought up gentrification and asked the council if have they have properly surveyed the possible 600 homeowners and addressed their concerns.

“Come on government, come on my colleagues, we now how to do this!” exclaimed Tayari.

Deshawn Miller, a resident of the new historic district, believed in the preservation of her neighborhood.

“Am I concerned about taxes being raised and no being able to afford staying at my house? Yes, but that has nothing to do with the historic preservation.” Miller said as she held her daughter’s hand, then telling the council: “I am concerned about preserving where I live and this is why.”

One frustrated Jersey City resident told the city council, “Stop f*****g telling me what to do with my house, it’s my house!”. City hall security had to calm the speaker.

Kathleen Parker, a home owner, said she understood that property taxes are very high, but it’s a price to pay to own these homes. “My biggest fear if I remain here and the area does not keep the houses intacted, it’s not going to be worth living in the area: it’s a quality of life issue.”

Carleton Lewis, a resident of Bergen Avenue, criticized the signs that supported West Bergen-East Lincoln Park Historic District. One of the three photos that were used for the sign was his home.

“I don’t support this and the house on the top left is mine.” He also said that the homeowners for the two other homes on the sign were also against the preservation. 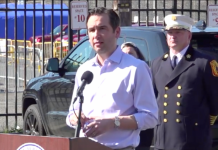 Ex-Jersey City police chief on 2 indicted cops: The city was...