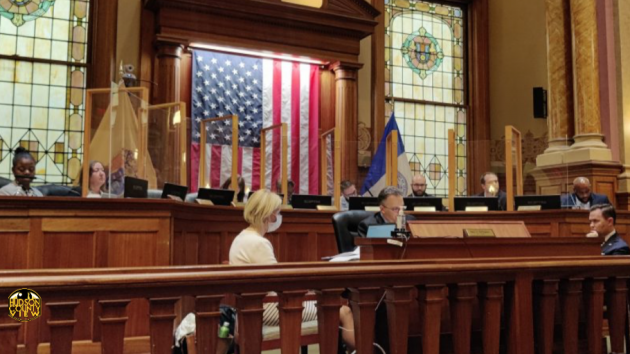 “I realized after casting my vote for Resolution 22-621 that I had a conflict which should have compelled me to abstain on the matter. I was tired after having endured five hours of the emotionally charged environment of last night’s council meeting, and in my eagerness to conclude the meeting, I forgot that I had intended to abstain,” she said in a statement

“I realize that my vote cannot be retracted, but I wish to note that the vote was unanimous and that the vote which I cast was not decisive in the measure’s passage. I regret this error and pledge to be more mindful in the future.”

The meeting turned into a bit of a marathon session since it was the first session with public comment since Councilwoman-at-Large Amy DeGise’s July 19th hit-and-run (she doubled down that she would not be resigning).

As far as cannabis dispensaries go, Uforia, Jersey Leaf, Butler and Baldwin, and Decades Dispensary were the dispensaries that were all approved unanimously last night (8-0) with Ward C Councilman Rich Boggiano absent.

Butler and Baldwin is co-owned by Jennifer Moore, who is Watterman’s daughter and has a 60 percent stake in the company, and her husband David Moore – who co-owns the additional 40 percent.

The council president was in attendance when the cannabis control board approved the measure at the end of June.

Also during Wednesday’s council meeting, United Food and Commercial Workers Organizing Director Hugh Giordano endorsed Uforia, Oceanfront Holdings, and Butler and Baldwin for their resolutions since they signed Labor Peace Agreements (LPAs) where the companies pledge not to interfere if their workers seek to organize a labor union.

Councilman-at-Large Daniel Rivera was the council member to vote against the withdrawal of Cannabis Place Corp and Oceanfront Holdings. Watterman made the motion to withdraw them and they each passed 7-1.

“It was brought to our attention that the person who applied with this application didn’t live in the State of New Jersey, all right, that was what was brought to us,” Watterman said regarding Cannabis Place.

“When the community comes to the CCB and complains, they should investigate it. This is why this is being tabled. I want that on the record.”

Cannabis applicants must be residents of New Jersey for at least two years prior to the date of application.

Orduna told HCV that while he was scheduled to speak, he was in the bathroom when called and missed his turn after waiting for hours (he was speaker 137 out of 152).

He explained that when he became aware they were concerned he had no local resident as a partner, he quickly made a deal to transfer five percent ownership to Hudson County Clerk Junior Maldonado, a longtime friend and supporter.

“The CCB’s counsel reviewed the information and spoke to the council members, and they agreed it was no material change. It is a minor change that five percent transfer,” Orduna noted.

CCB Counsel Ron Mondello declined to comment on the situtation.